The view under water

Once we were under the water, we saw some pretty spectacular coral reefs, filled with lots of fish and large sea sponges in vivid shades of purple and red. Everything was new and unexpected with creatures hidden in nearly every nook and cranny and camouflaged in ways that make you want to look at everything twice.

For instance, check out this Spotted Scorpionfish… 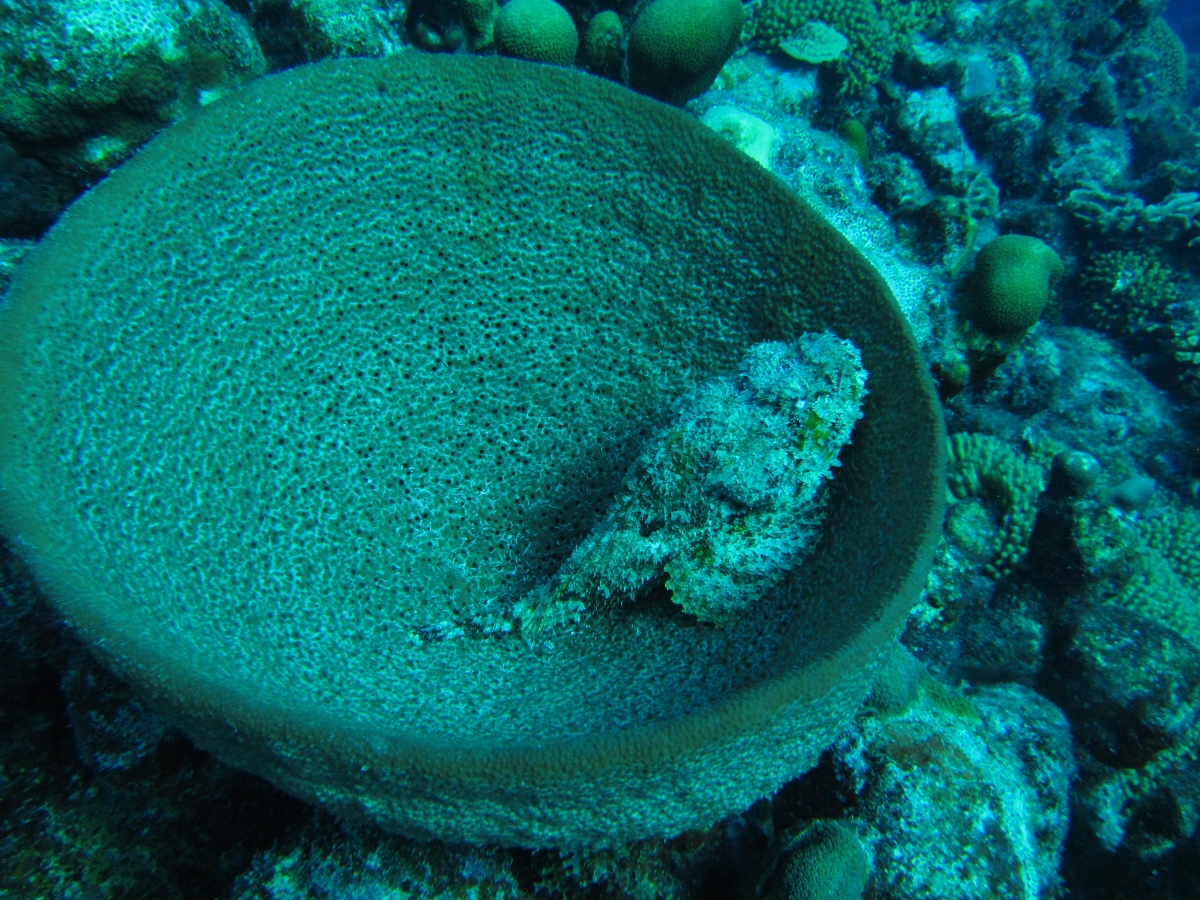 While a lot of the creatures we came across blended in with their surroundings, we also saw plenty of fish that took a different turn on the evolutionary path and instead of blending in, are brightly colored.

For example, this Queen Anglefish … 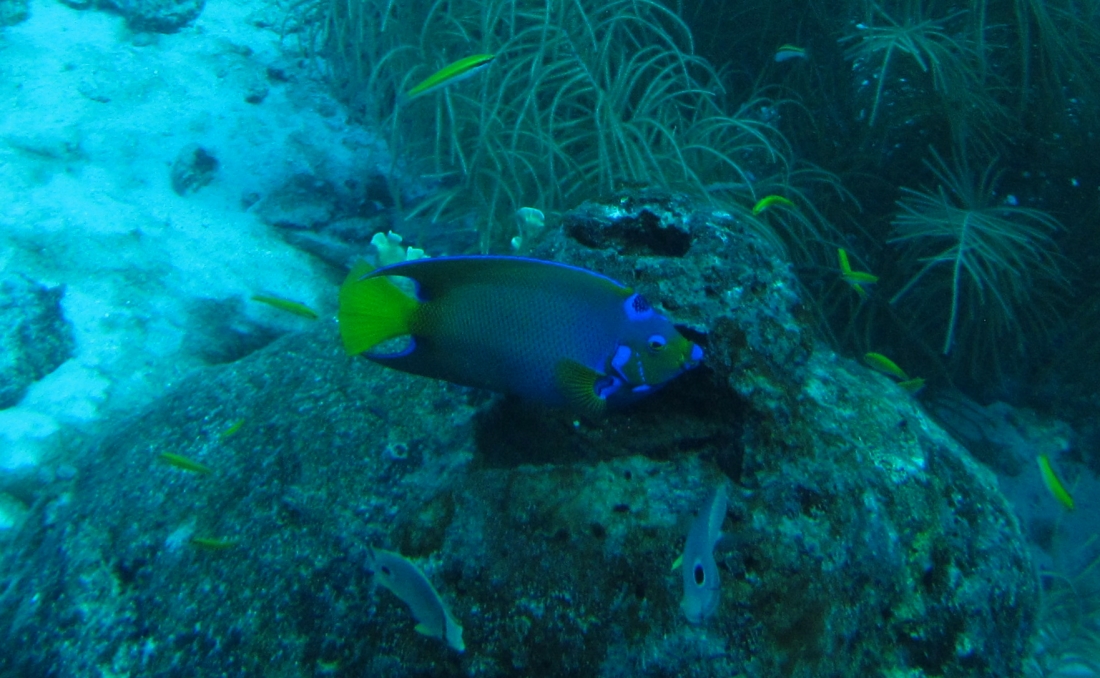 Because of the natural water filter, combined with my lack of underwater photography skills, coral that appeared brightly colored in person transformed into a bland palette of muted browns. These photos really don’t capture the vividness of the colors we saw in person.

For example, the nearly 3 foot tall Elephant Ear Sponge in the picture below is really a brilliant shade of orange… 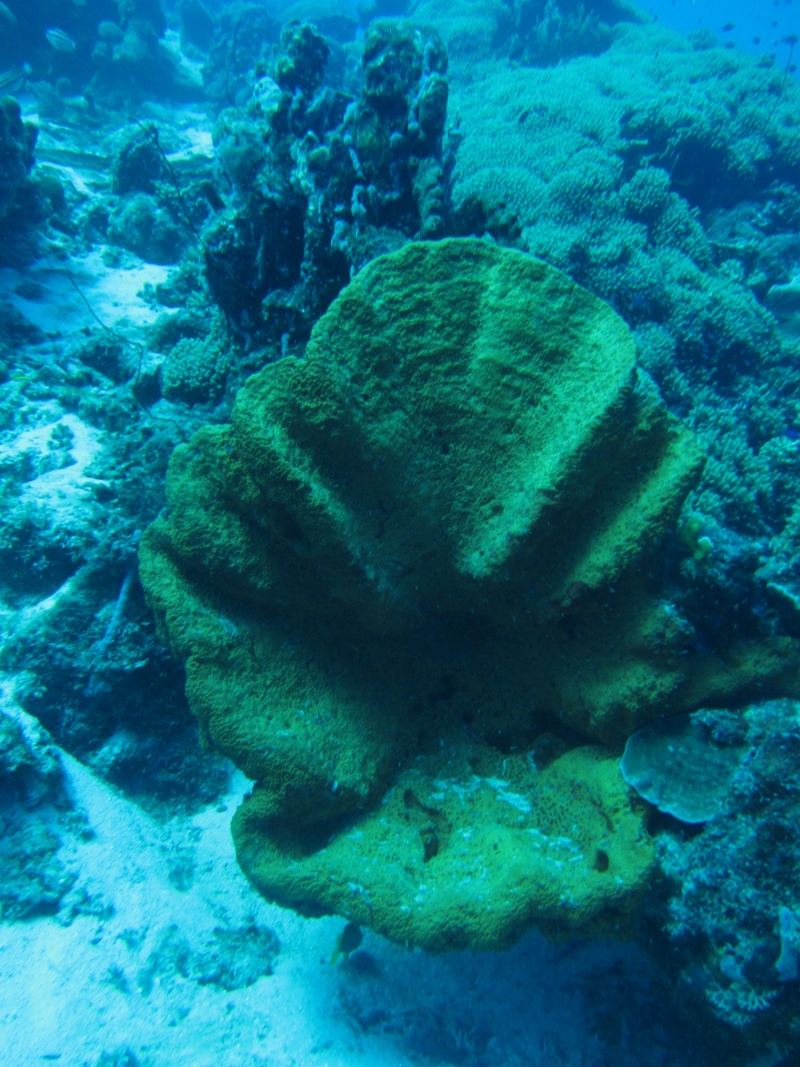 I think the key element here is lighting. In the following picture, I was able to sort-of capture the beautiful shade of purple that many of the tube sponges were.

To see some better examples though, just check out some of the photos that come up when you do a Google Image search for Purple Tube Sponge. 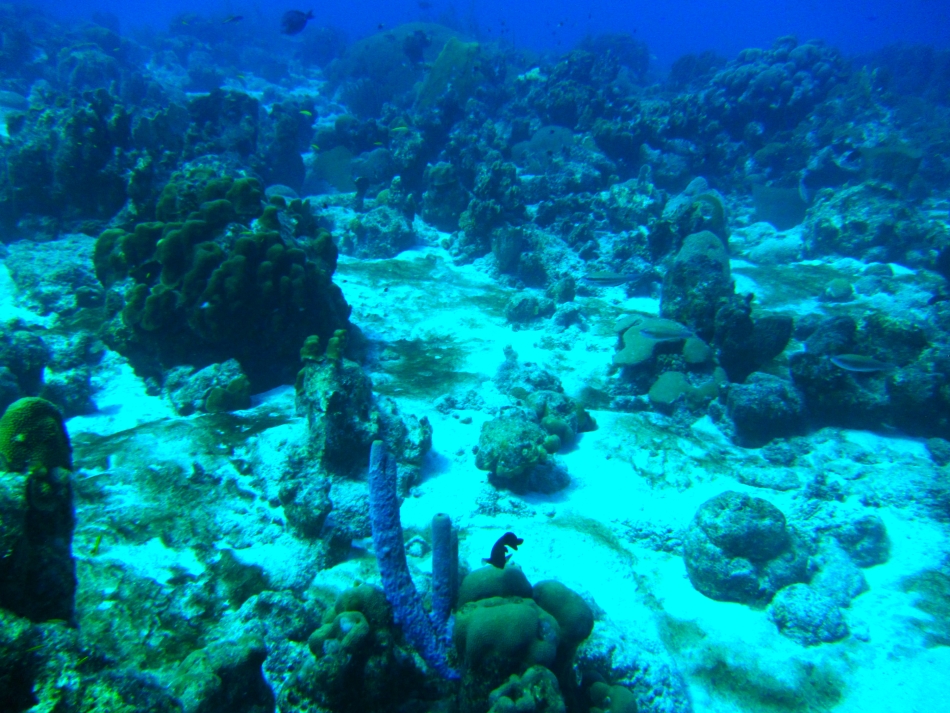 To me, scuba diving is essentially the equivalent of Alice’s Wonderland where everything is fluid and the only thing to be expected is the unexpected. It’s a twist on the reality I’m used to, and it’s both beautiful and a little scary…

Everything under water is constantly moving. Even plant like creatures that seem stationary, will quickly retreat into holes for protection if you get too close, and it happens so fast, that it seems as though they just disappear into thin…

Turns out that these particular ‘plants‘ are actually not plants at all, but Christmas Tree Worms!!

That’s them in the pic below…the spiny looking spirals. 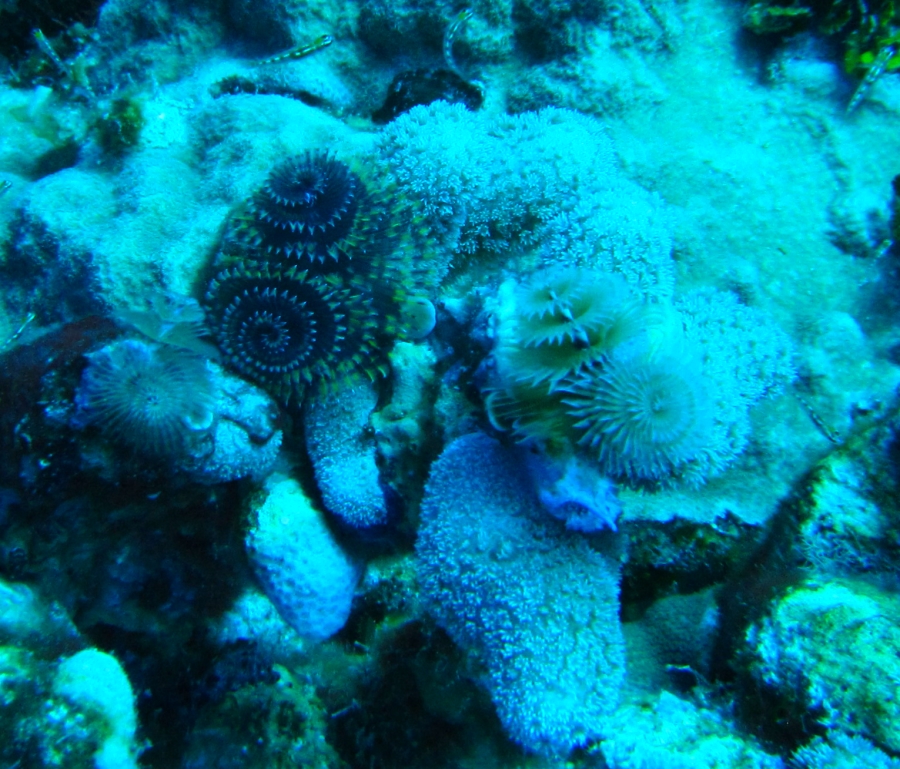 I’m not sure what the white things that look like Venus Fly Traps are in this next pic, but they also retracted when we swam by! 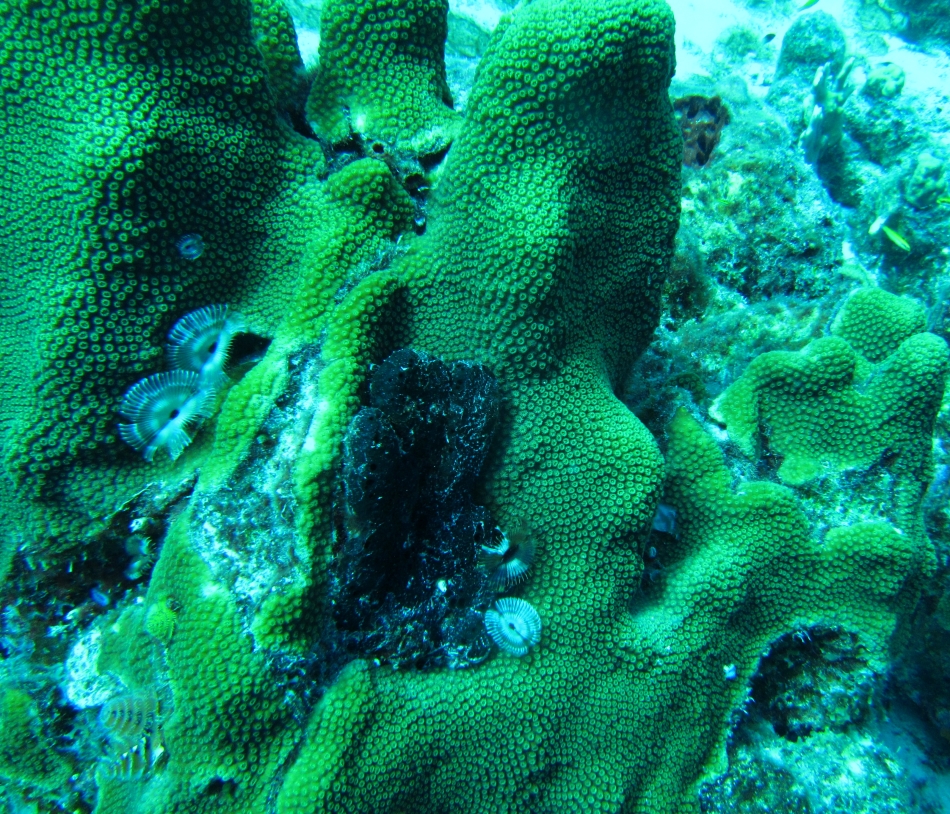 The first second is in real time, then, it replays in slow motion…

During a portion of our dive, we swam through an area that, in retrospect, seemed like the perfect habitat to find a Sea Horse.

After getting home and scrolling through various online forums, I learned that there are definitely sea horses in the area, but you have to really look for them…these elusive little creatures are apparently hard to find.

If/when I dive here again, I’m definitely going to make it a point to try and find one! 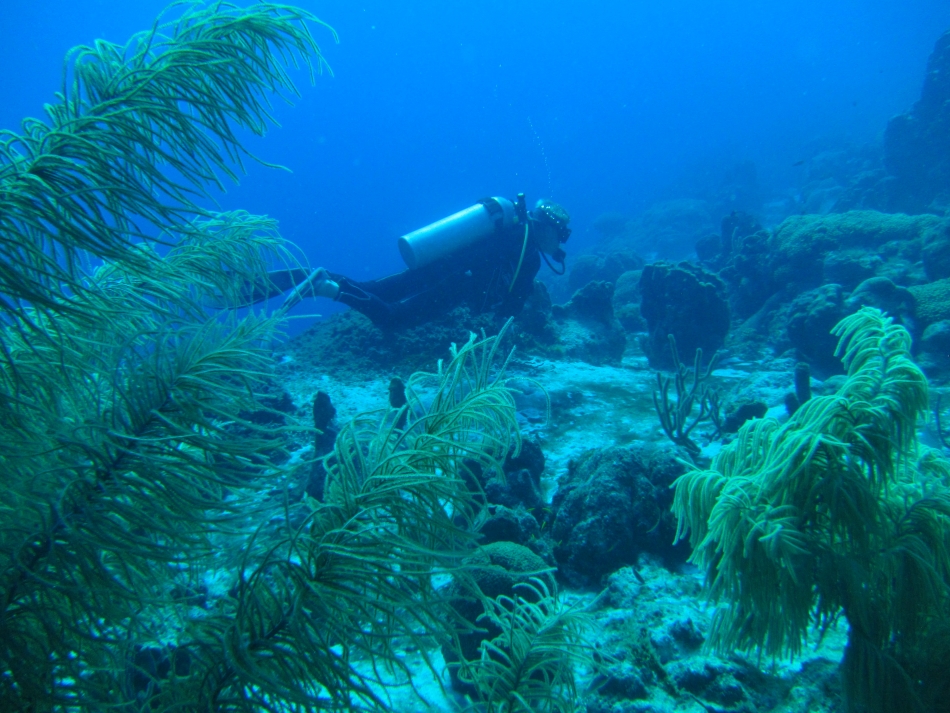 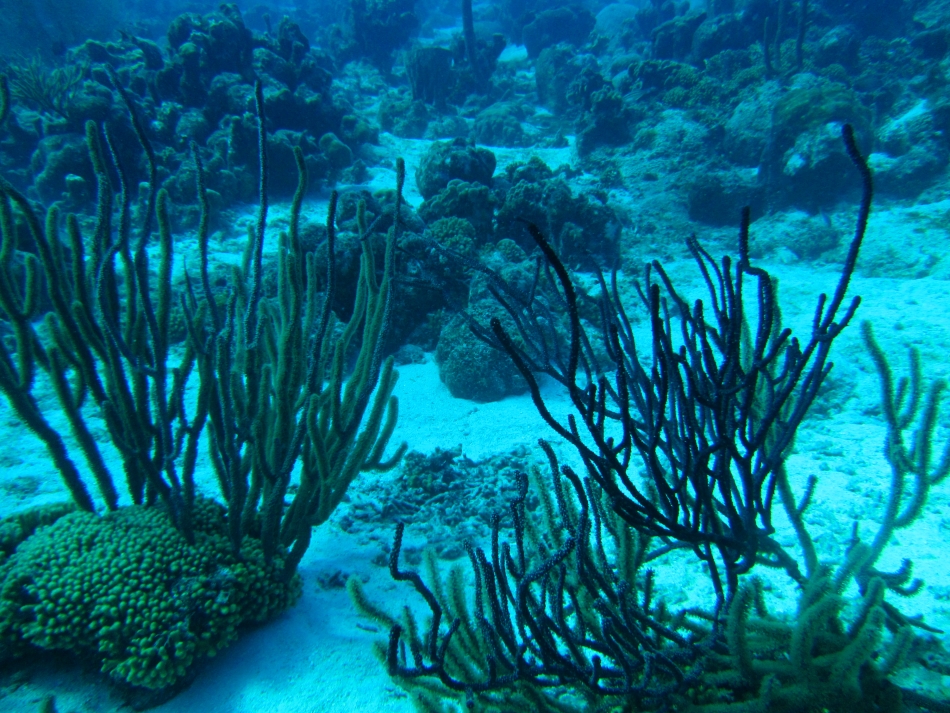 Some of the other sea life we encountered during our dive included lionfish, trumpetfish, barracuda, rock shrimp, trunk fish, parrotfish, blue tang, jawfish… really, the list goes on and on!

Although I tried my best to capture as many photos of the different fish as possible, I did, unfortunately, miss a few that I was really excited to share with y’all.

For example, I didn’t get a picture of the the rock shrimp that was scurrying around, on a piece of coral. When I swam over to get a closer pic, he or she, disappeared before I could even think about pushing the shutter button! 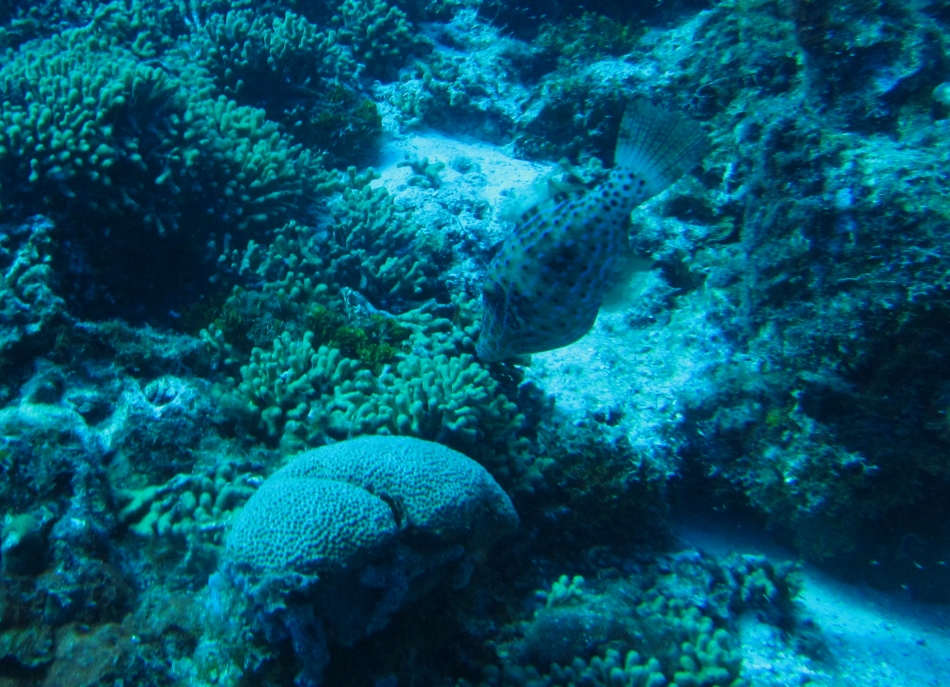 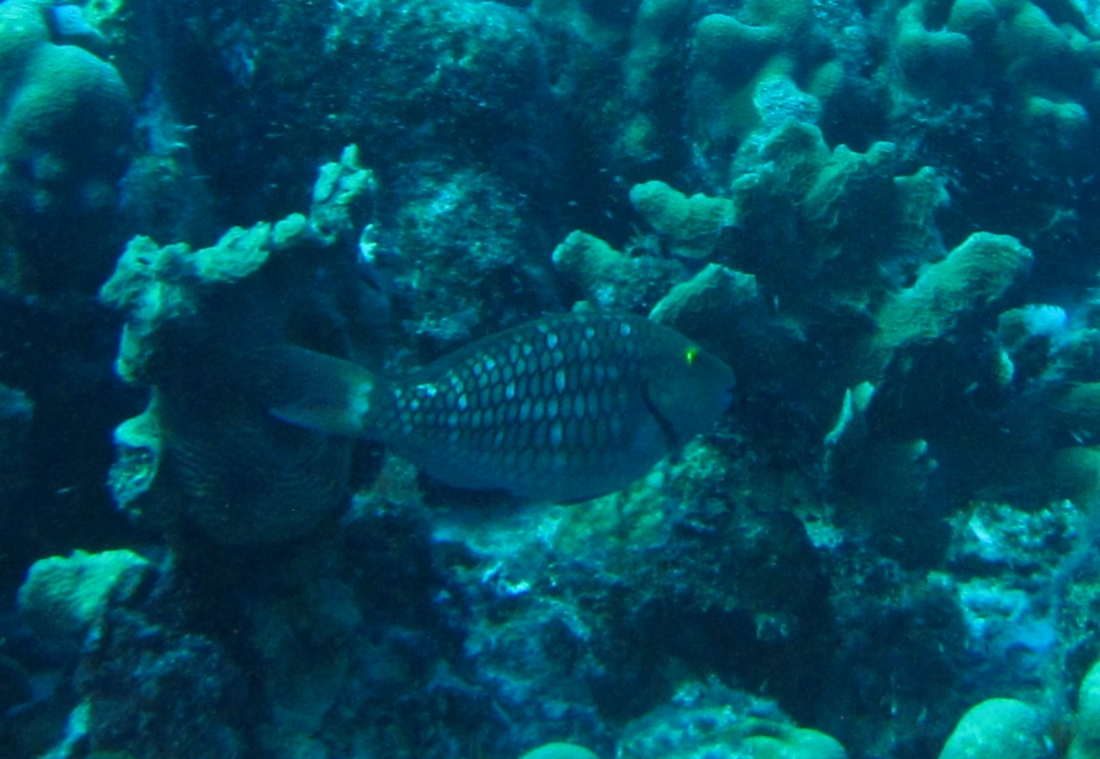 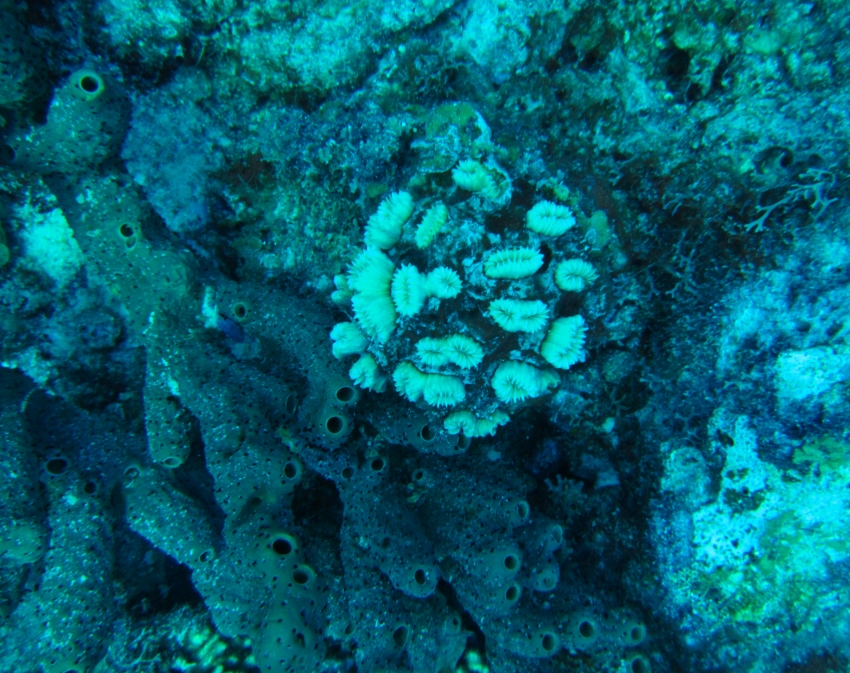 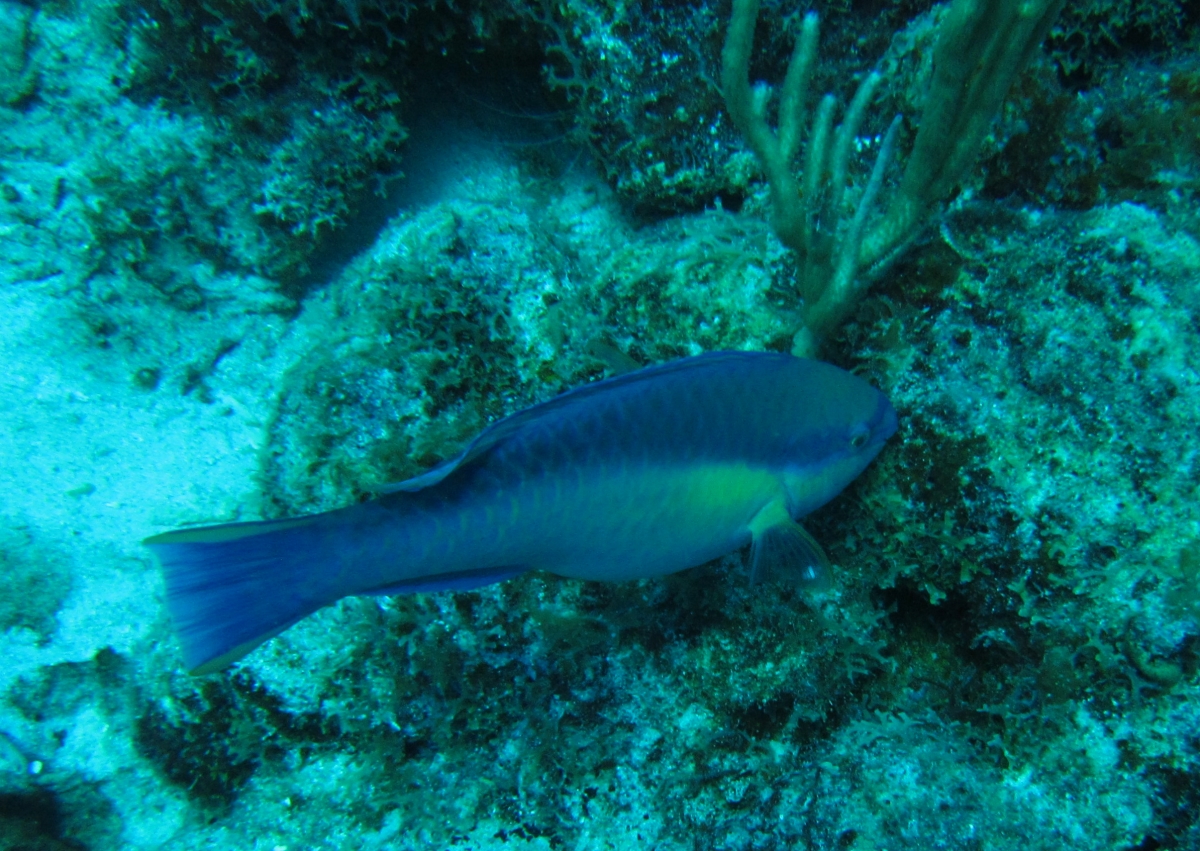 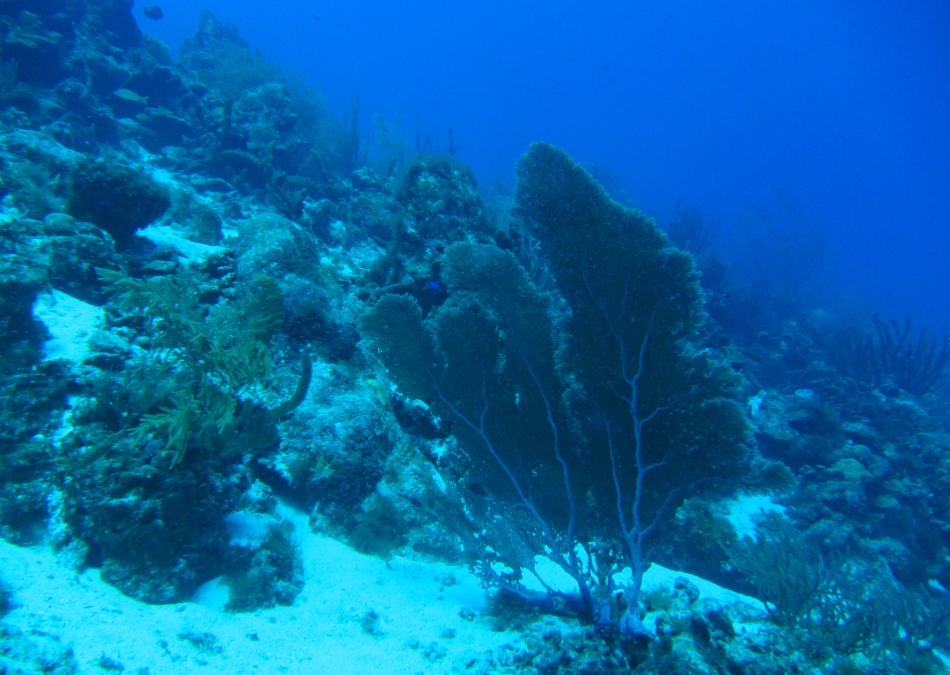 Below: School of Yellow Striped Goatfish

What a bizarre name!

Also, bizarre – mimicry, as in having the ability to rapidly change color, based on your surroundings.

These fish can do that and according to Wikipedia: The “changes in color are reversible phenotypic changes [that] happen within seconds, many times during the lifespan of an individual [fish].” 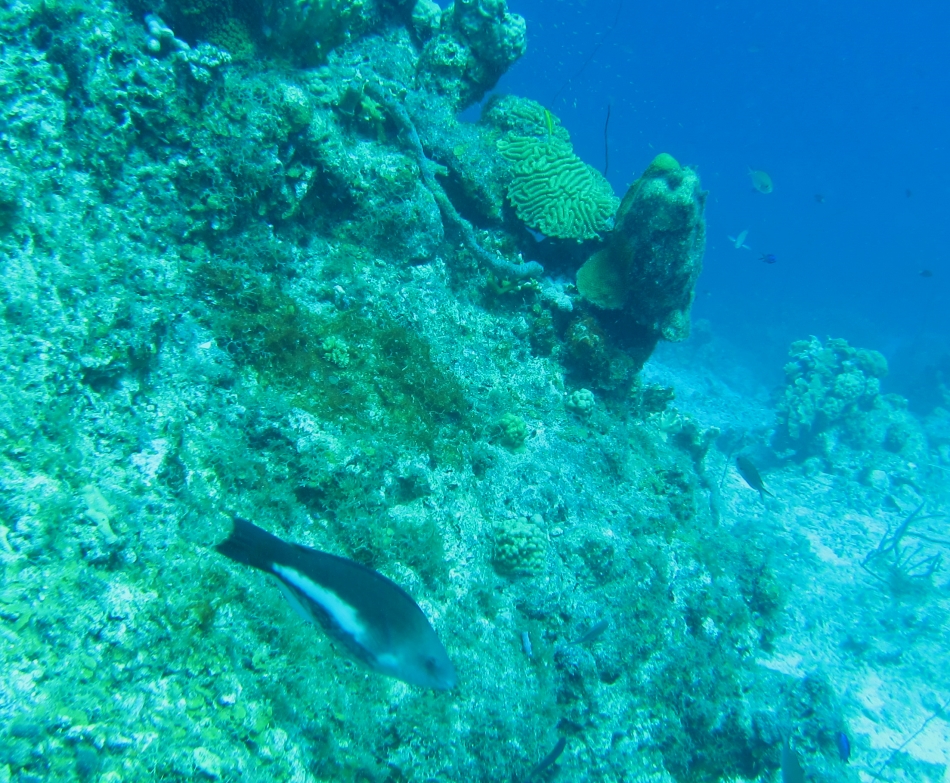 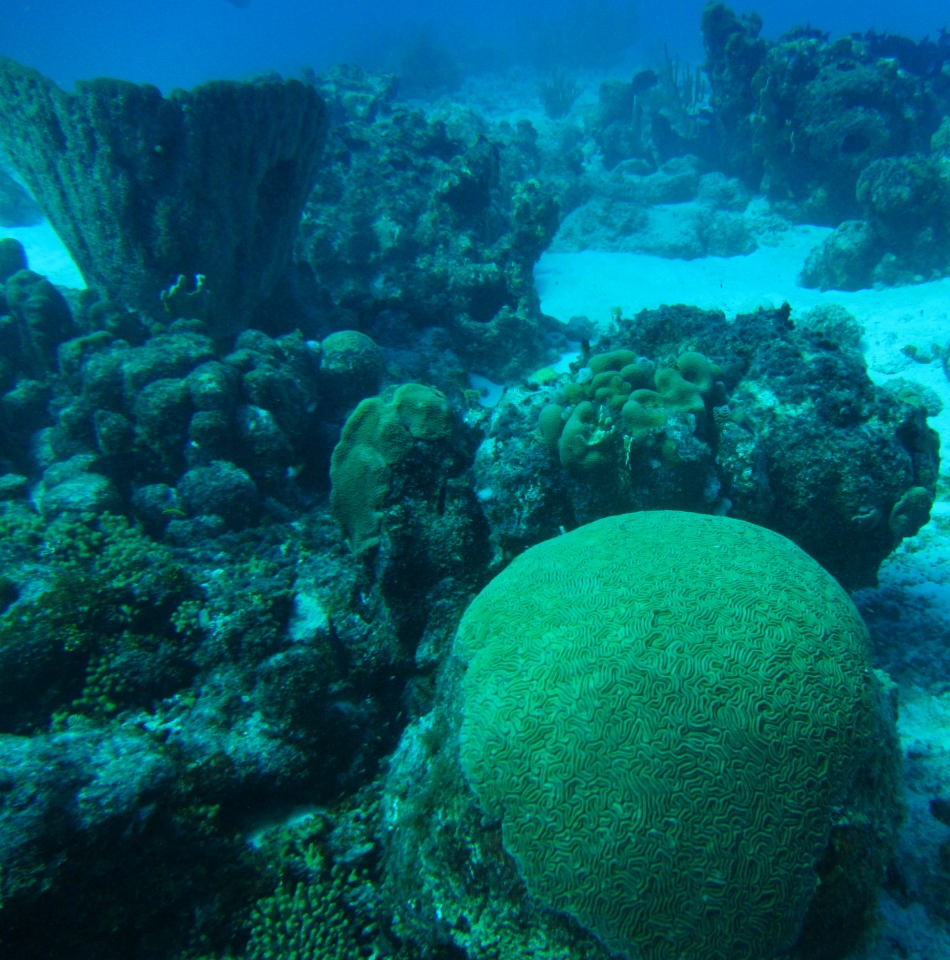 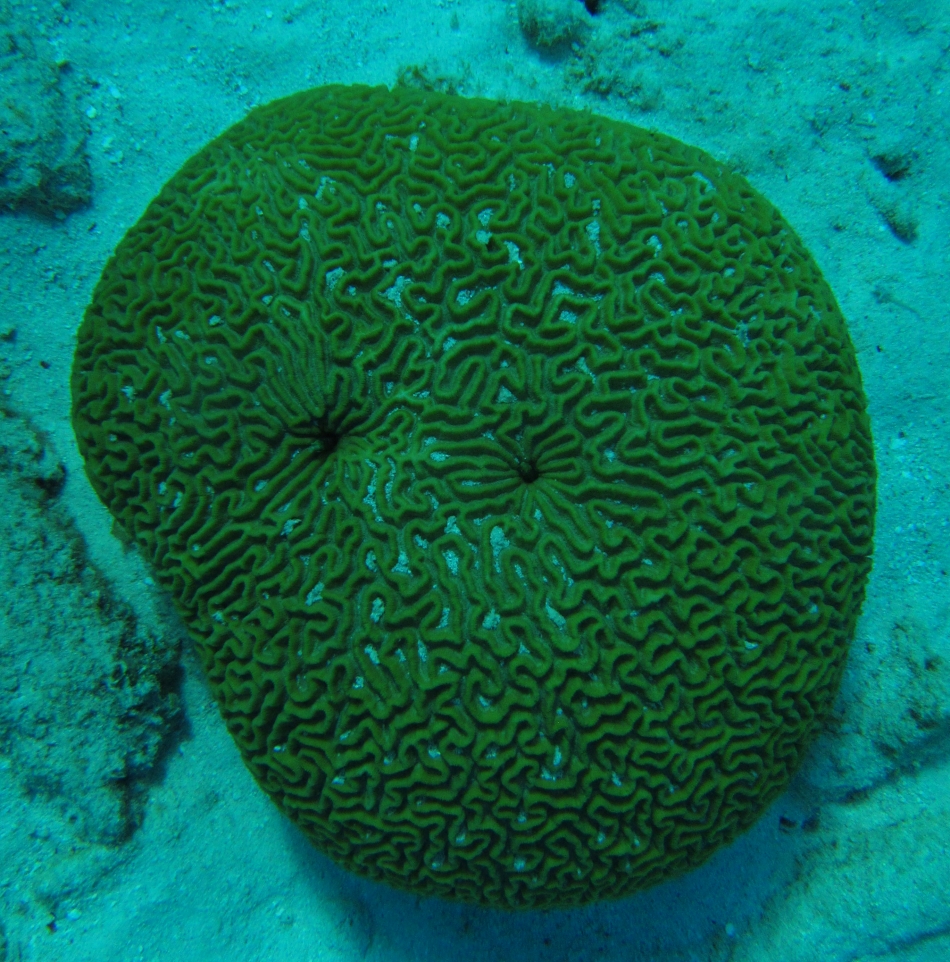 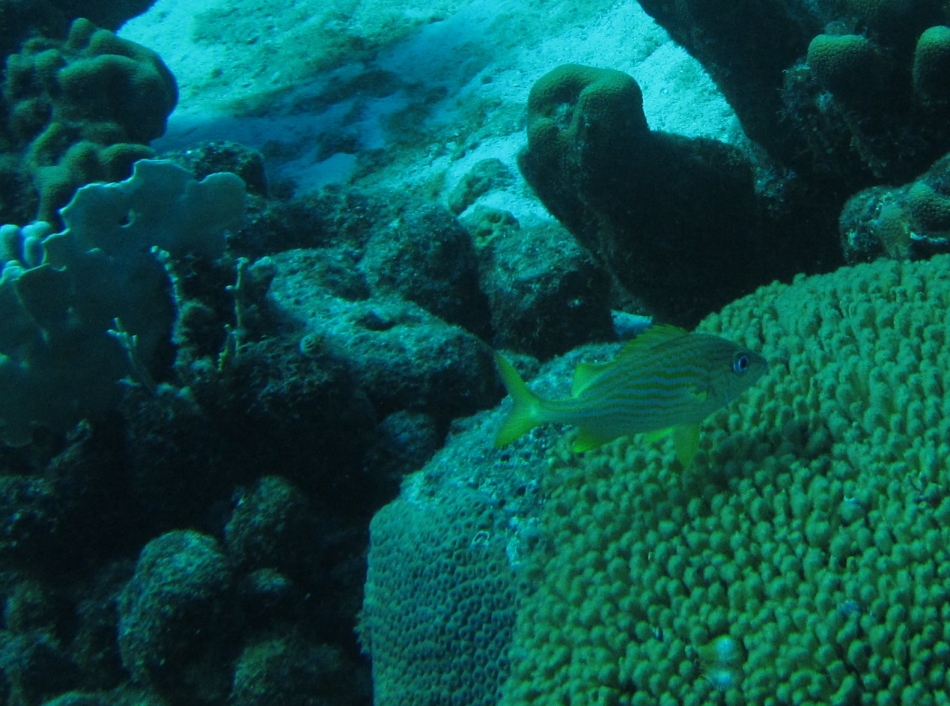 Below: Basket Sponge (in the center) 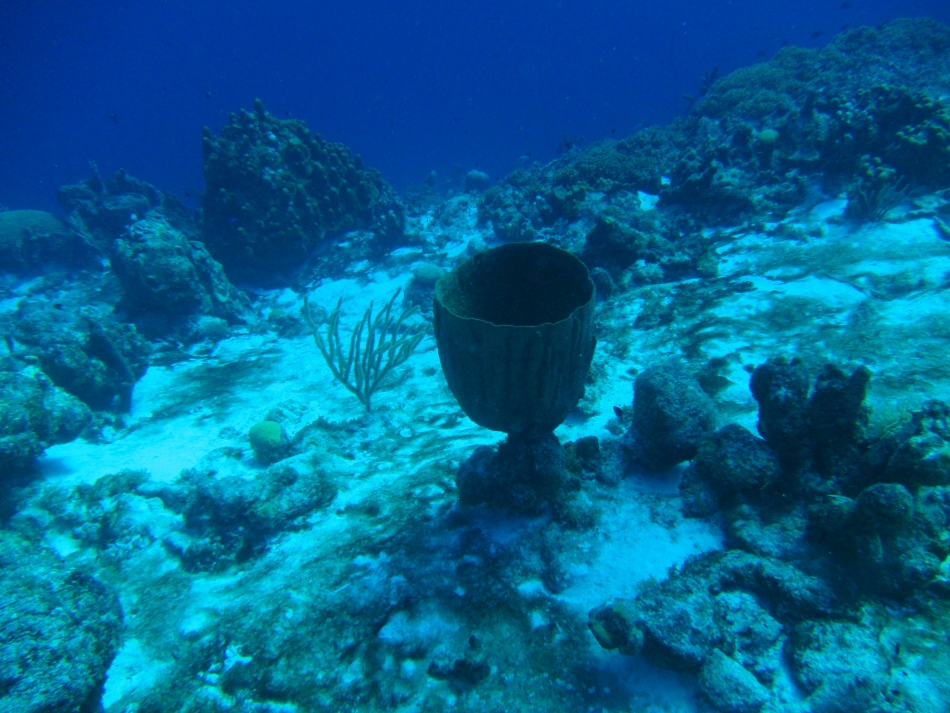 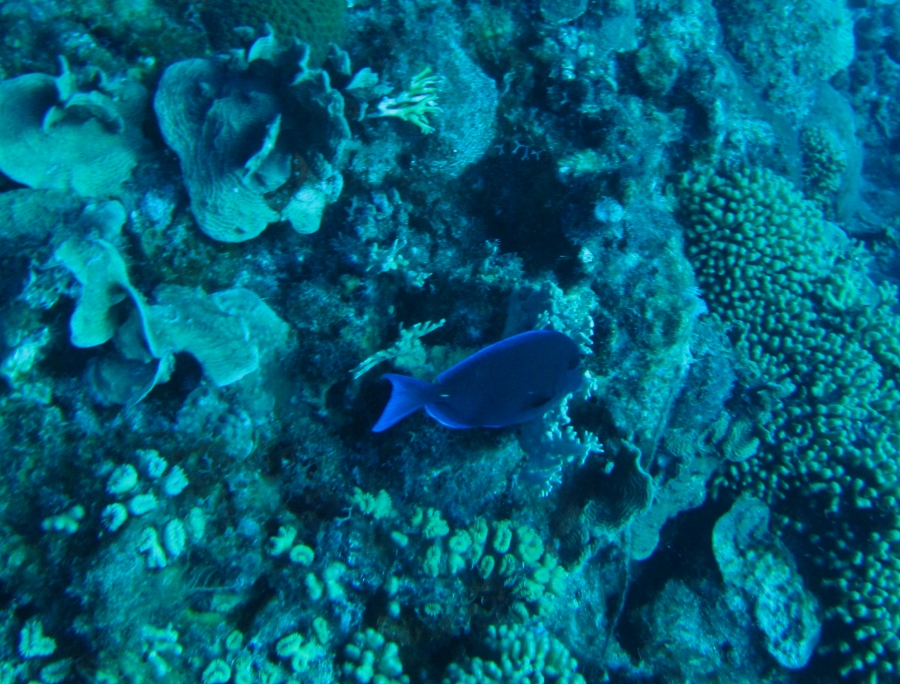 Next Day: Shopping in Curacao is (almost) a completely different experience than shopping in the United States.