You might recognize Zac Young from Top Chef’s Just Desserts. While formerly employed in the wig department of the Radio City Rockettes, Zac Young had an epiphany: he would rather be baking cookies than fluffing Santa beards. He enrolled in culinary school and the rest is history!

After graduating with honors from the baking and pastry arts program at the Institute of Culinary Education, Zac went straight to the top, working under Sebastian Rouxel and Richard Capizzi at Bouchon Bakery. In 2006 he was offered a position of Pastry Chef at the New York City hot-spot Butter Restaurant. While there, Zac developed his signature style, using classic French technique, bold flavors, and fun to put a creative twist on American desserts.[Bravo] Zac isn’t just a great pastry chef – he’s a fun guy to be around. In the short time I spent with Zac in the culinary loft, Zac taught me and other Barista Prima Coffeehouse guests, how to make four delicious recipes to pair with four flavorful blends of Barista  Prima Coffee. One of my favorites was the Pear Tart Tatin which Zac expertly paired with a delicious cup of fresh brewed Barista Prima House Blend. See recipe below.

In a medium pot cook sugar and water until dark amber. Deglaze with cream and bourbon. Let cool.

For the Puff Pastry: 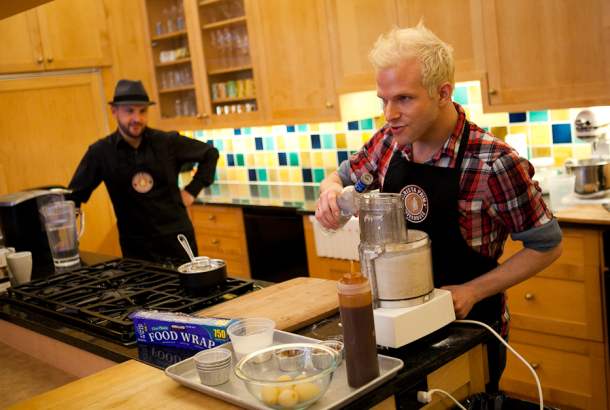 Pulse butter, flour and salt in a food processor until butter is the size of a hazelnut. Transfer to a bowl. Kneed in vodka and soda water. Roll dough into a rectangle on a well floured surface. Fold by the long ends into thirds like you were folding a letter. Roll into a log from the short ends. Refrigerate for at least an hour

Cut 4 pears in half, remove the cores and slice into 6 slices on each half.

Butter or spray eight 4 ounce ramekins and place two table spoons of caramel on the bottom. Place half a pear, sliced, into the caramel keeping the sexy round part on bottom.

Roll out the puff pastry to 3/8th of an inch thick and cut with a cookie cutter so it covers the pear.

Bake at 375 for about 30 minutes until the puff is golden brown. While still warm, invert onto a plate and serve with any leftover Bourbon Caramel. 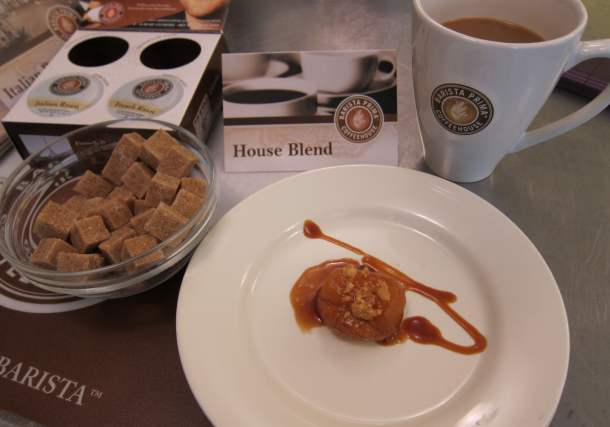 I hope you enjoy this recipe as much as I did and don’t forget to pair it with Barista Prima’s House Blend, which has complimentary tasting notes balanced with a lively splash of citrus, subtle hints of bittersweet chocolate and a well-rounded, toasted-nut finish.