Celebrity Fashion Designers To-Tam & To-Nya SACHIKA presented their FALL 2011 collection “The Awakening of a Swan” inspired by Darren Aronofsky’s film Black Swan & Kanye West’s film “Runaway” on February 16, 2011 at at the Metropolitan Pavilion South. This collection is made for the confident women and is bursting with color, texture, and strong architectural design. Every single piece from this season is strong, sexy, and passionate (and totally belongs in my closet*;-).

So many of the items are boldly accentuated in form and detailing and certainly belong on a woman who is fashion forward and strong – spirited. During the time I spent editing the photos, I also kept thinking of so many successful artists, musicians, and celebrities who I can see wearing SACHIKA.

Perhaps, in another post, I will re-visit that idea and do a side by side of which celebrity I think would look best in each! 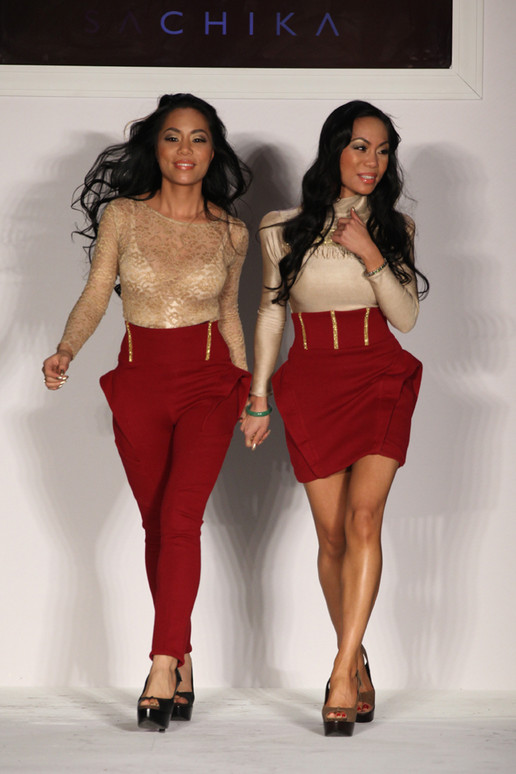 The runway show opened with a swan inspired performance by New York City Ballet dancers Kimberly Gianelli and Kendahl Ferguson, and closing the show was International Recording artist Kat DeLuna performing her new single “Dancing Tonight” from her upcoming album “Inside Out”.

This song is incredible and has been stuck in my head ever since the show – super catchy!

I took video of both performances (watch Kat Deluna here)

Here is a montage of the full collection from Sachika Fall 2011, along with a ballerina entrance and dance!

Also, I will present the [full] collection of photos.

Note: Photos are broken down into 7 galleries which must be viewed separately.

SACHIKA is a movement that encourages women to be independent, strong, and ambitious. The Yin & Yang Vietnamese entrepreneurs also known as the SACHIKA TWINS moved from Montreal to New York City to achieve the ultimate “American Dream.” SACHIKA has now earned a secure place amongst the stars as it proudly celebrates and embraces all body types.