In 2003, I traveled to Northern India, where I somehow gathered the courage to jump off a nearly nine thousand foot mountain, relying solely on a parachute to bring me back to the ground safely. I still remember standing at the top, debating whether or not to go through with the jump, or simply throw in the towel and take the car back down the mountain.

As my knees shook from fear, I made the decision that I would not back out and I jumped – what an exhilarating feeling! The closest I’ve come to that sensation since then was this afternoon, when I took not one, but two cable cars to ascend over 11,000 feet to the top of Pointe Helbronner, before climbing the longest and steepest set of stairs that I have ever seen in my life! 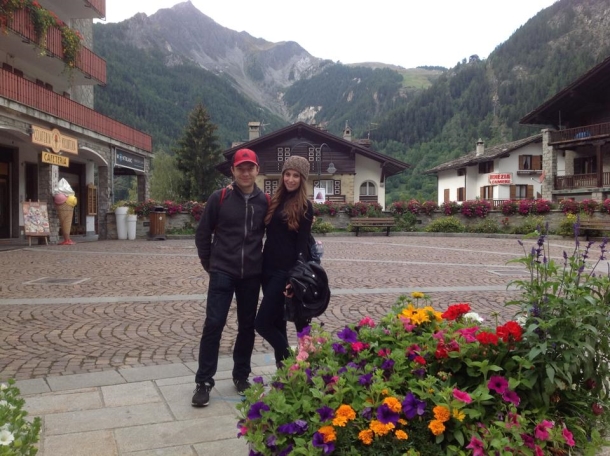 Pointe Helbronner is located in La Palud, Italy, next to Monte Bianco, the tallest mountain in Europe. Although it was a warm day on the ground, by the time we reached the top of the mountain, it was snowy and cold. As we got closer to the top, I felt the same knot in my stomach and the weakening sensation in my legs that I felt years ago in the Himalayas. Now I’m a skier, so I’ve been on cable cars before – in fact, plenty of them.

This cable car, however, was the steepest one that I’ve ever been on and possibly also the oldest (well except for some of the lifts at Catamount – those things are ancient. But, they also don’t go very high so still less scary…).

The first cable car at Pointe Helbronner brought us to a landing zone that was still low enough in elevation to have plant life. At this level, there are lots of colorful flowers and also a really pretty view of the village below. There is even a restaurant with outdoor seating and a little gift shop. The ride up to this level wasn’t so bad. From this level, however, we boarded a second cable car to go (much) higher.

As the second cable car approached the top landing zone, we were riding on a nearly vertical wire. I couldn’t shake the feeling that at any moment, we might slip backwards and go railing down into our death! (I know, I know, I tend to err on the dramatic side – but seriously, check out the pics!) 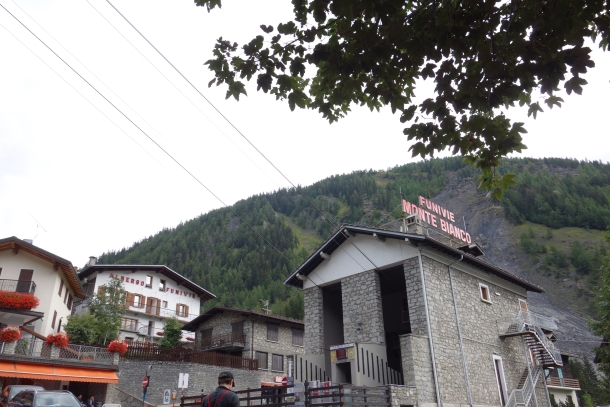 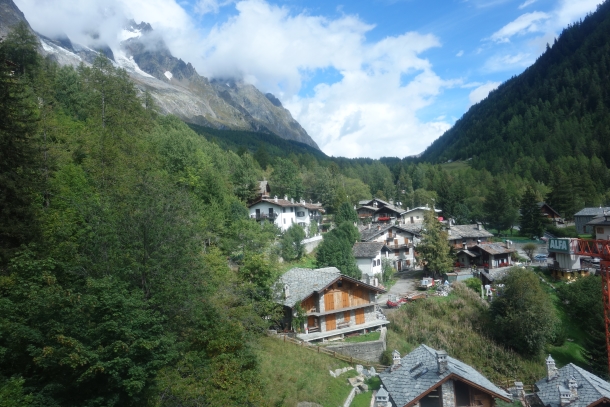 We passed another car, which you can see in the bottom right photo… 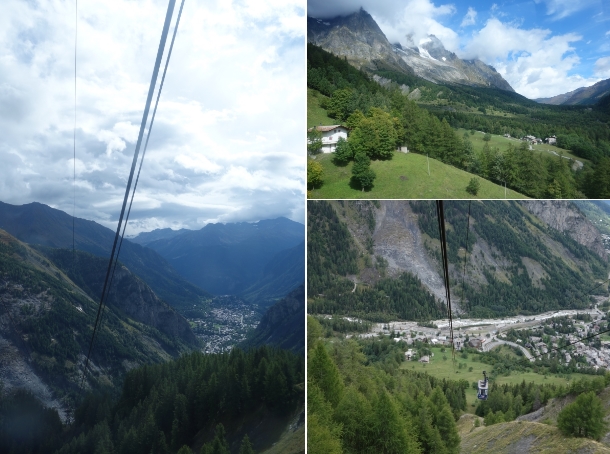 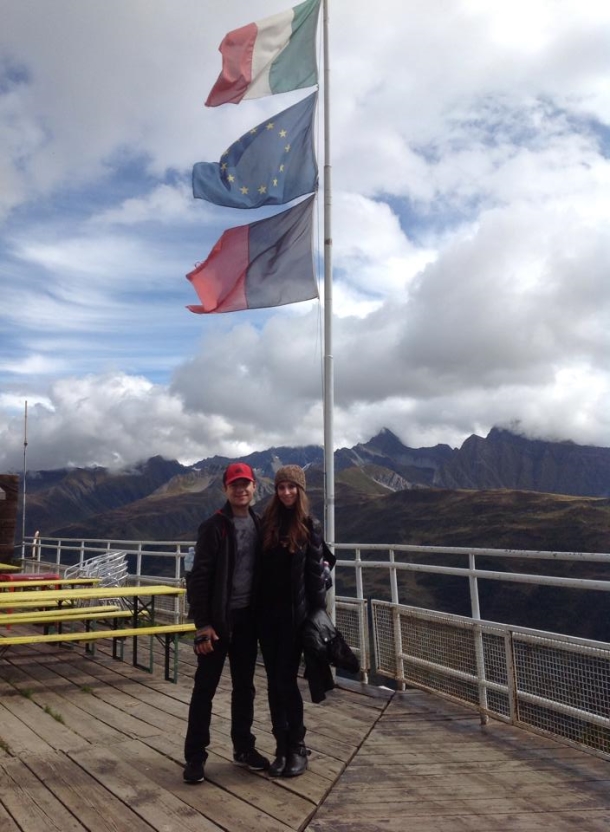 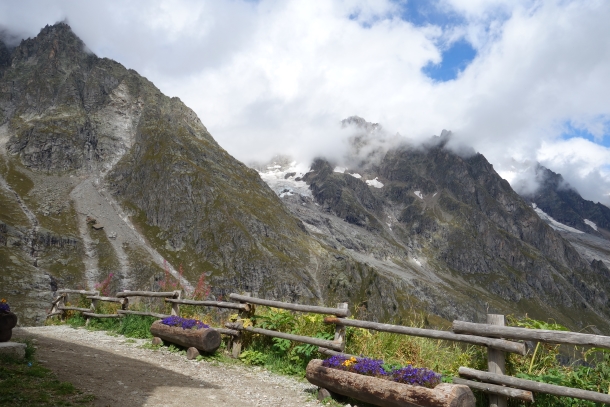 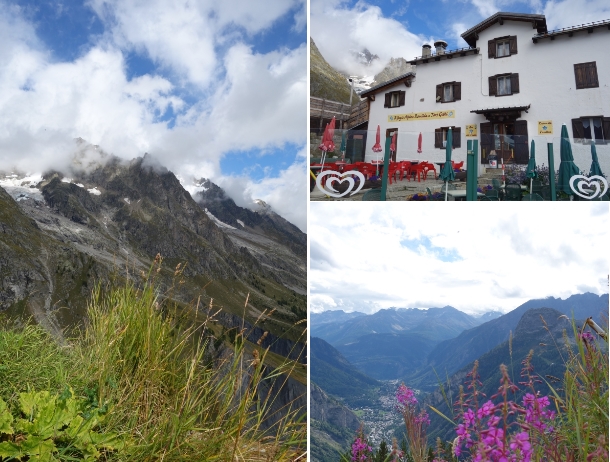 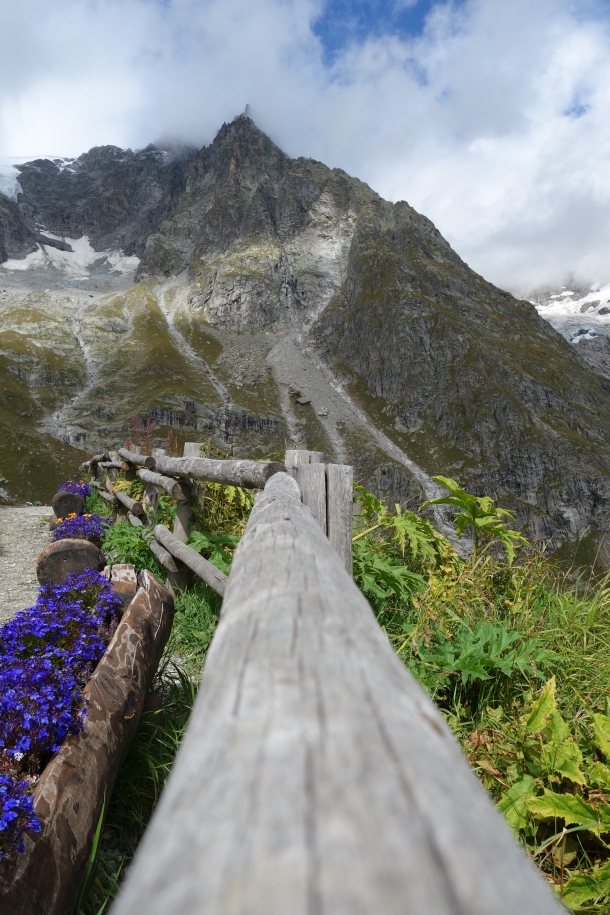 The ride up to the second landing… 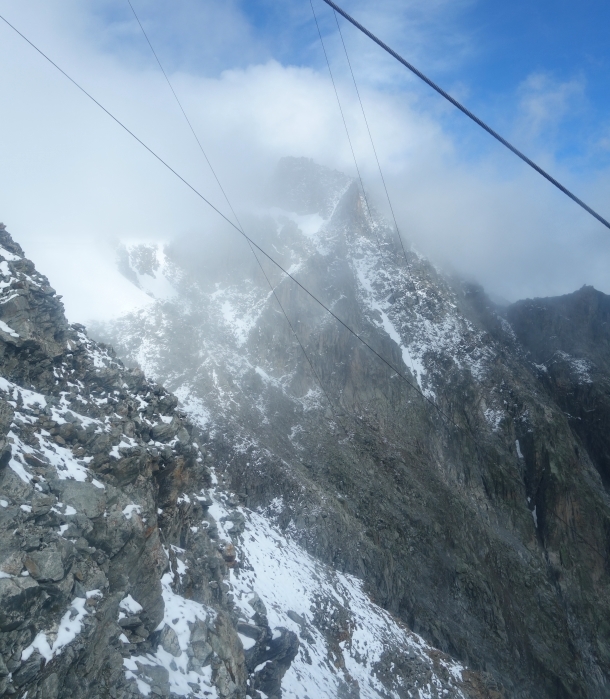 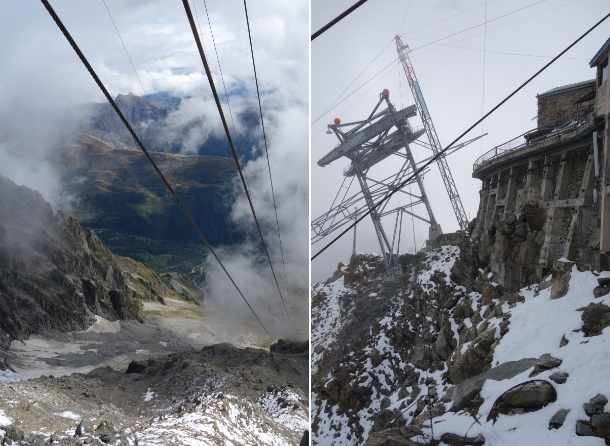 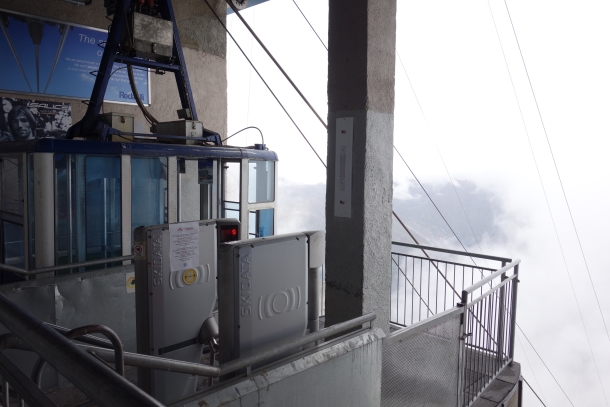 As if we weren’t high enough already, after departing the second cable car, we were led to a set of stairs so steep that at several locations, one might use the word ladder, rather than stairs to describe the structure. There were actually special railings built in order to catch someone in case they happened to fall. A stumble on these ‘stairs’ would certainly lead to a serious injury – or worse. The first picture (on the left) only shows a portion of the stairs.

The second photo (on the right) is a view of the stairs from outside. You can see how the wooden structure covering the stairs hugs the curve of the mountain! 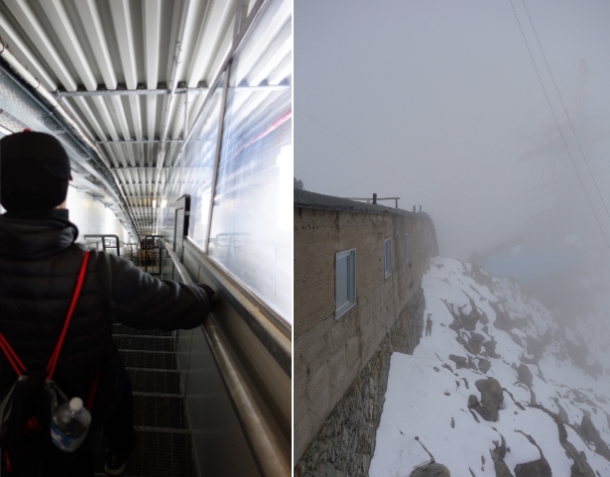 My legs felt as though at any moment they would turn to butter and I would somehow slip off the side of the mountain’s cliff into nothingness… all the warning signs that were posted didn’t help calm my nerves at all! (Not to mention, there were occasional ice patches making for slippery conditions.) 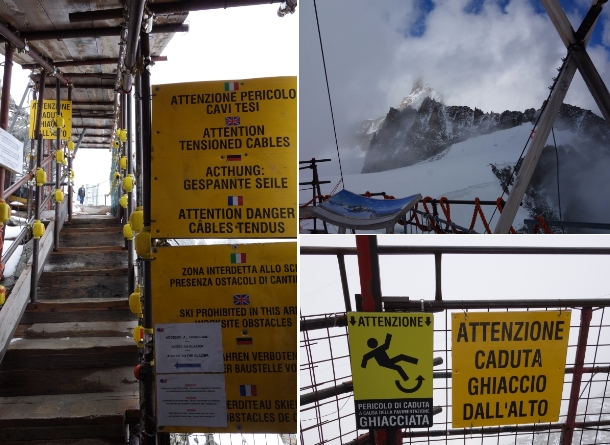 Once at the top, the view was spectacular! A morning fog was just lifting and the sun was peeking through and shining down on the valley below. There were glaciers on the mountain sides and had the fog lifted even more, we would have seen even more peaks in the distance. Looking down, you could see tiny specks on the mountain – climbers!

There were a few folks who had already made the journey up the mountainside by foot and were now leaving the top and taking the stairs down. It was pretty neat seeing them carry all of their equipment – helmets, ice picks, ropes, etc. 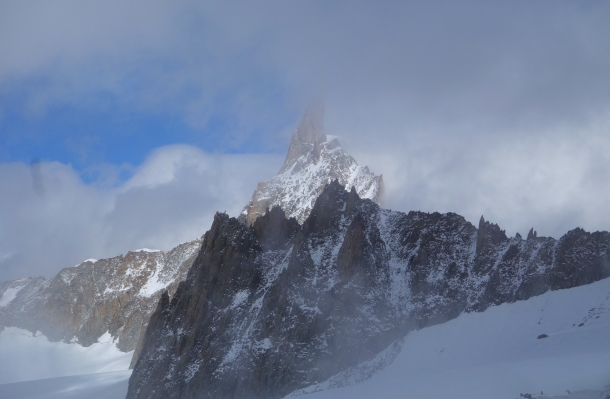 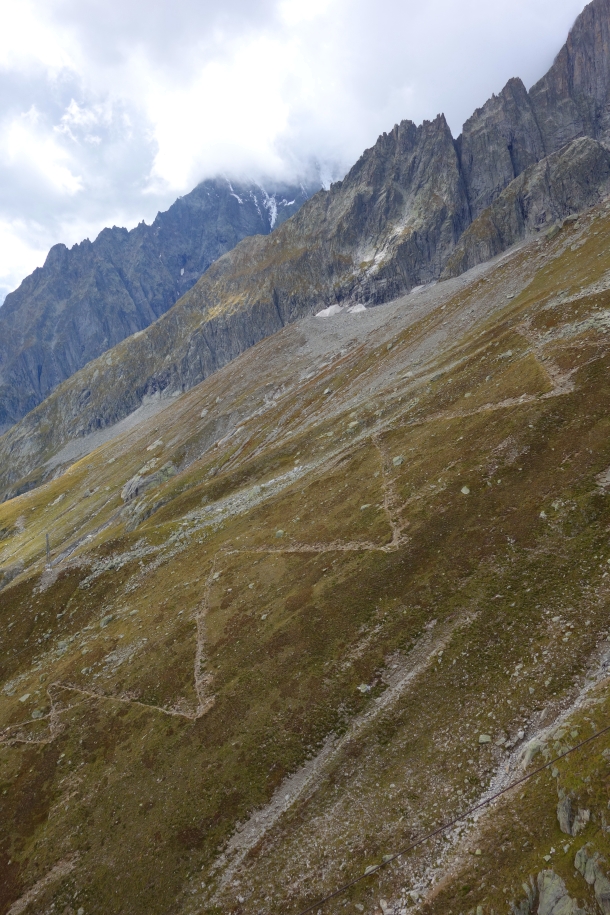 Taking the cable cars to the top of Pointe Helbronner was a really cool experience that was well worth the 40 euro.

If/when I return, I would like to spend a little more time on the mountain and dine at the restaurant with outdoor seating at the first landing zone. There is also a restaurant at the second landing zone that was closed when we arrived, but would also be a cool place to have a glass of wine (or hot tea) and really take in the view from the top.

Additionally, they are in the process of building a new cable car that will be more modern and go even higher – connecting the Italian and French border. The guide operating the cable car said that this new gondola is scheduled to open in the summer of next year (2015). I would definitely like to go back and experience that!

Also, there is plenty to do around the base of the mountain – little shops, etc. The village of Courmayer is only a 10-15 minute bus ride away and is a quaint little town with a lot to offer. I will do a separate post on that experience since this post is already pretty content heavy. Happy Travelin’ 🙂