Just a few years ago, Cueva Ventana was not yet a tourist hot spot. There was no fee to enter and no guide to help you navigate the guano lined tunnels of the cave, or to warn you to not get too close to the window’s ledge, overlooking Arecibo Valley; a slip of foot here would certainly not end well. Today, a boardwalk has been constructed, along with large signs and a tent where you can buy tickets – admitting you into the cave, along with a guide, a helmet, and a flashlight. While I’m sure that some magic (and about 2o bucks) are lost with the changes, I couldn’t imagine what it would’ve been like trying to navigate the inside of the caves without a guide (and a flashlight) while bats fluttered overhead and creepy crawlers scurried under your feet.

Puerto Rico was once home to the Taino people and their presence still exists in petroglyphs found throughout the caves – mostly in the form of smiley faces, which historians believe were meant to represent the sun. It’s easy to imagine what it might be like if the Taino were to be inside the cave for the night, by a fire – maybe even passing around a little Cohoba. Crazy shadows dancing on the walls from the stalactites and stalagmites and the effects of the hallucinogenic snuff.

The hike to and through Cueva Ventana is not a very long one, but the views definitely make it worth doing. After you get your tickets, there is a short walk up a dirt path to a meeting point. Along the way there are some rustic, but clean bathrooms. At the end of the path, there are a bunch of covered picnic tables, a small snack shack and a souvenir booth. There is also a place to pick up your hard hats, along with a bunch of stray, but happy looking cats sitting around licking their paws. From here on in, you hike with a guide who is offering up facts on the area. You can hear the coqui frogs chirping and when we went, the sound of light rain falling on the trees added to the experience.

I felt my blood rush a little when I came around the corner and saw the stairs leading up to the mouth of the cave. Part of me wished that there were no stairs – just us and nature the way it was before we had to wear hard hats. Basically, I just wanted to run up and explore!

But…first I had to listen to the spiel:

“Bats, bats, Taino symbols, don’t shine your lights on the ceilings because it will scare the bats, watch out for large centipedes…”

Then I listened to the same spiel all over again in Spanish:

Then we went into the first cave – yay!

The first cave is pretty much a big room with two large openings and a decent amount of light filtering in. You can easily spot symbols on the walls leftover from the time that the Taino civilization was still prevalent, as well as a few modern day etchings of initials carved into the wall and referred to by the tour guide as graffiti.

Ironic, no? The Taino carve symbols into the wall and it’s a petroglyph. A couple of high school lovers do it and it’s graffitti! Although, of course I get it; we want to preserve what’s left of the Taino heritage and we don’t want the cave becoming one giant canvas for switchblade artists.

The exit from the first cave and the entrance to the second are extremely close together and in between is lush fauna and what appears, from its size, to be an old growth tree; it’s roots are beautiful in the way that they seem to be climbing the mountain.

The descent into the second cave is short, but pretty steep and because it was raining, the rocks were very slippery. I had a hard time finding a good foothold to go down even though I was wearing sneakers with good tread! Thankfully, there’s a rope to help brace the climb. At the bottom another guide was waiting and once everyone had made it down, he pulled out a red light and used it to illuminate the cave without alarming the bats. There were large clusters of them hanging from the ceiling!

After walking through a few narrow turns, we came to the grand finale – a spectacular view of Arecibo Valley!

Although beautiful, it felt strange to see an opening so far up above the ground. It reminded me of the sky cells at the Eyrie from the show Game of Thrones…yikes! The small sparrows and bats fluttering around the entrance only added to the creepy factor. But still…it was beautiful. 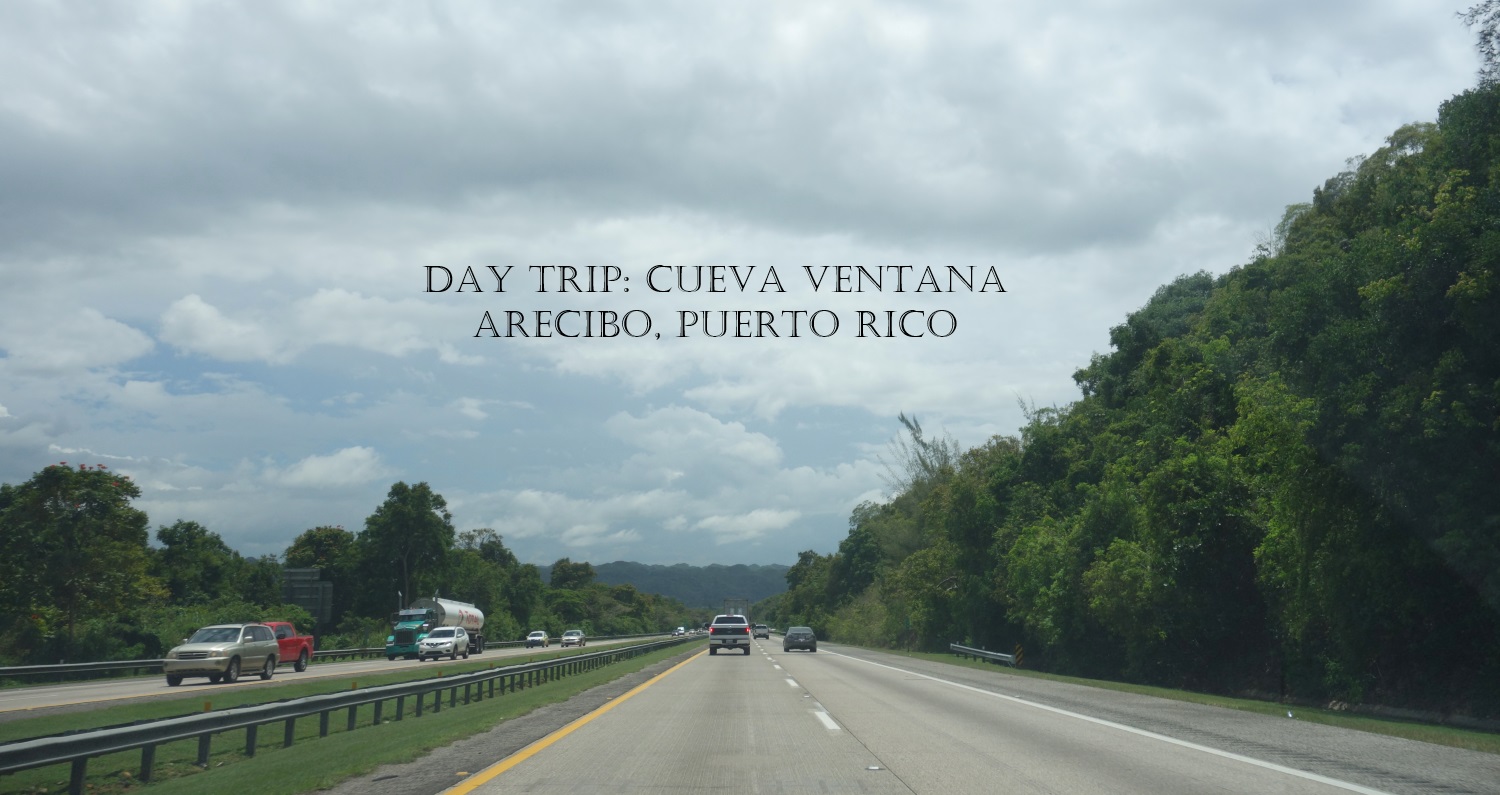 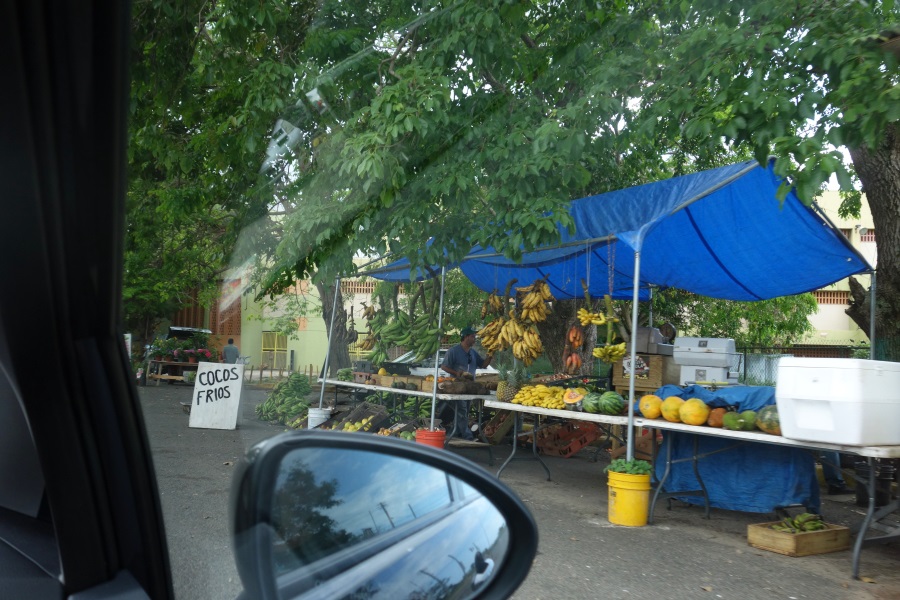 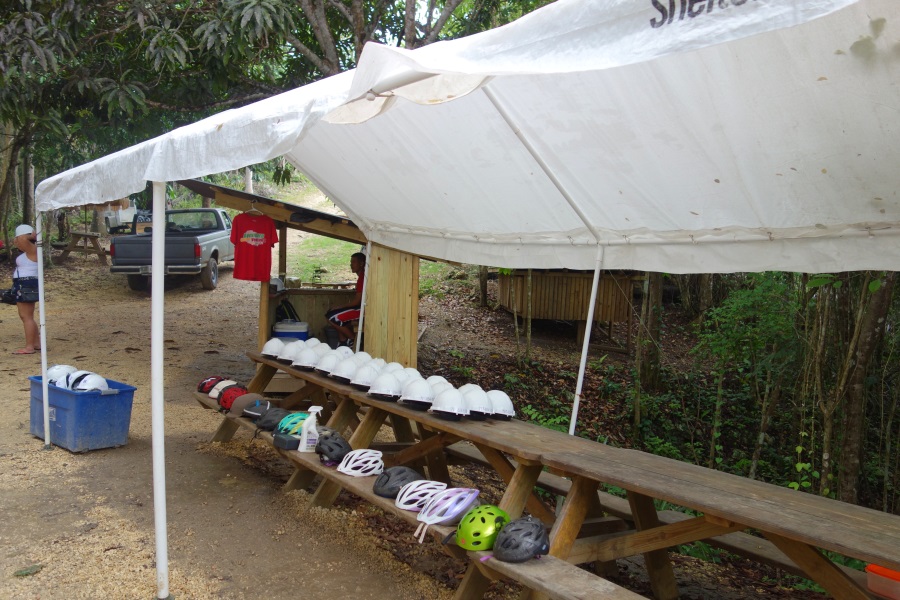 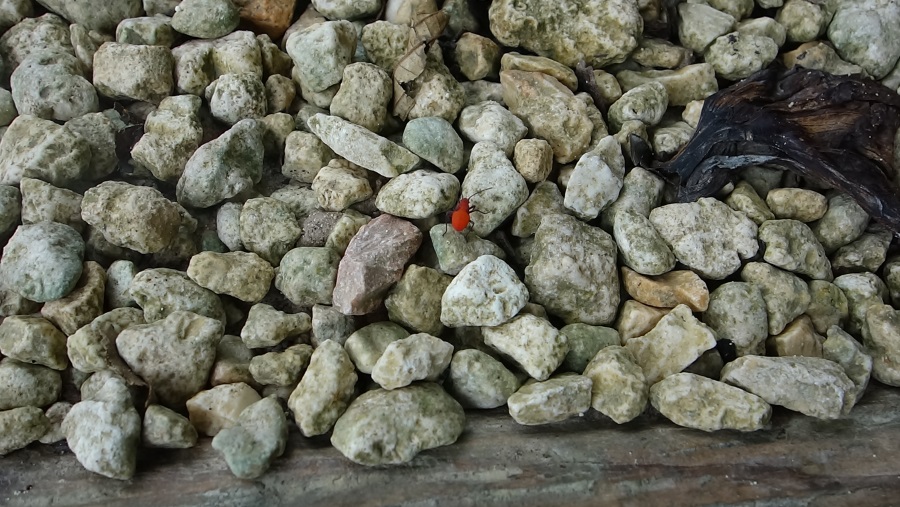 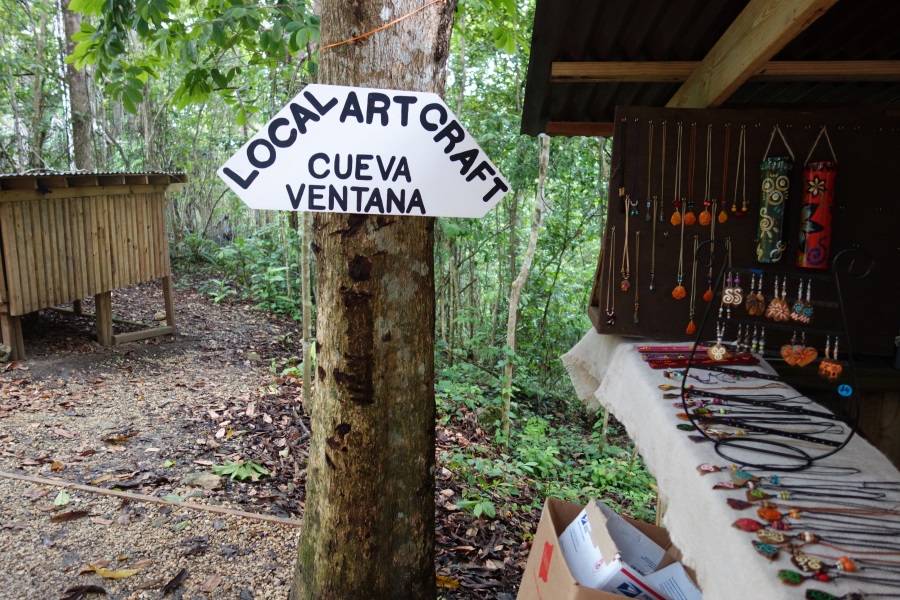 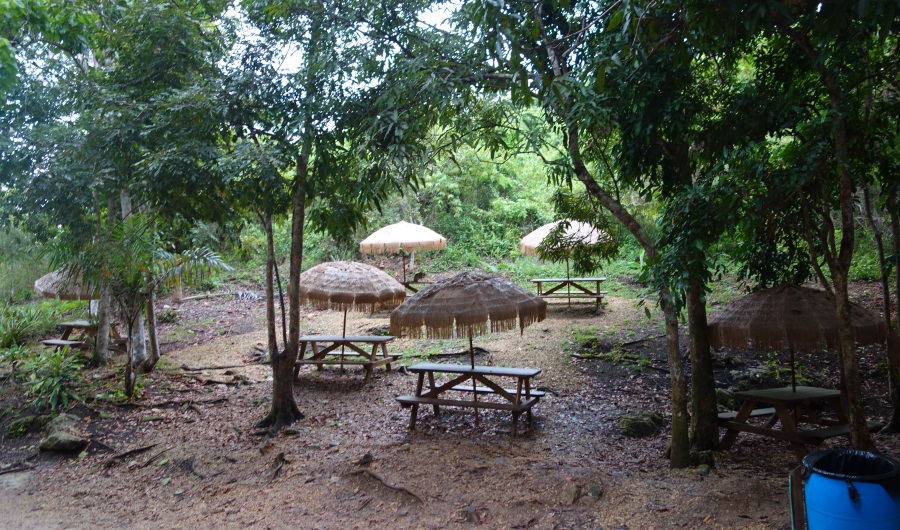 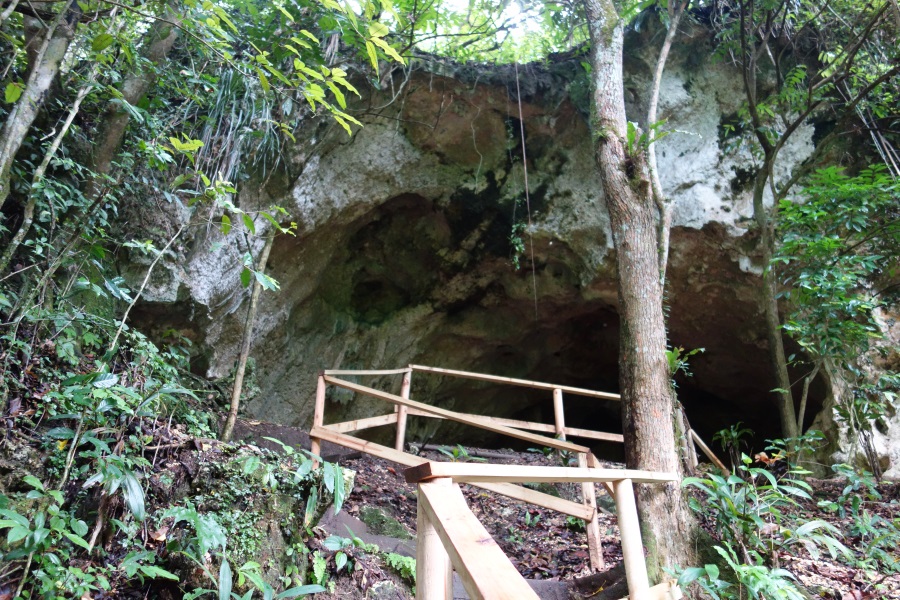 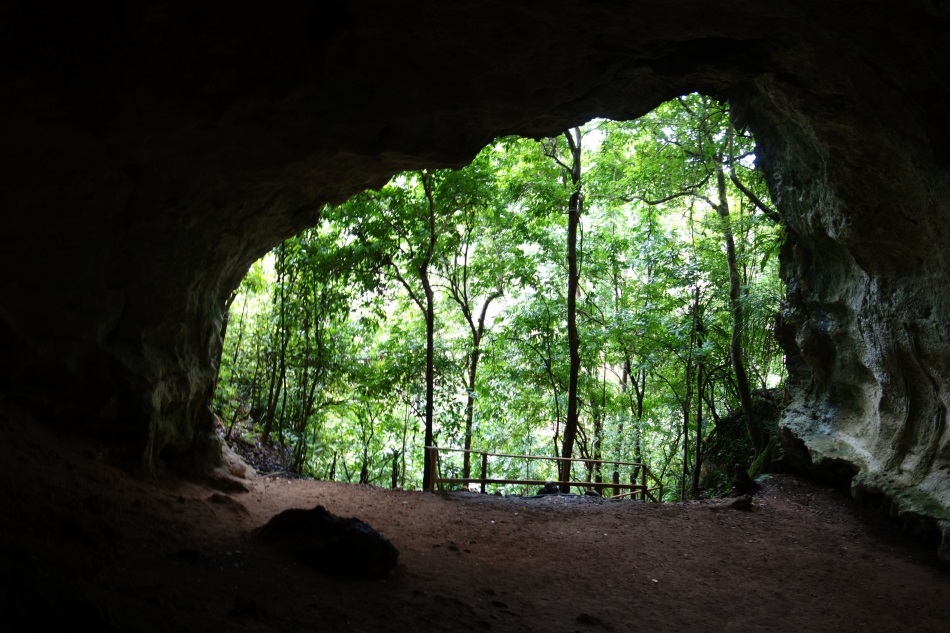 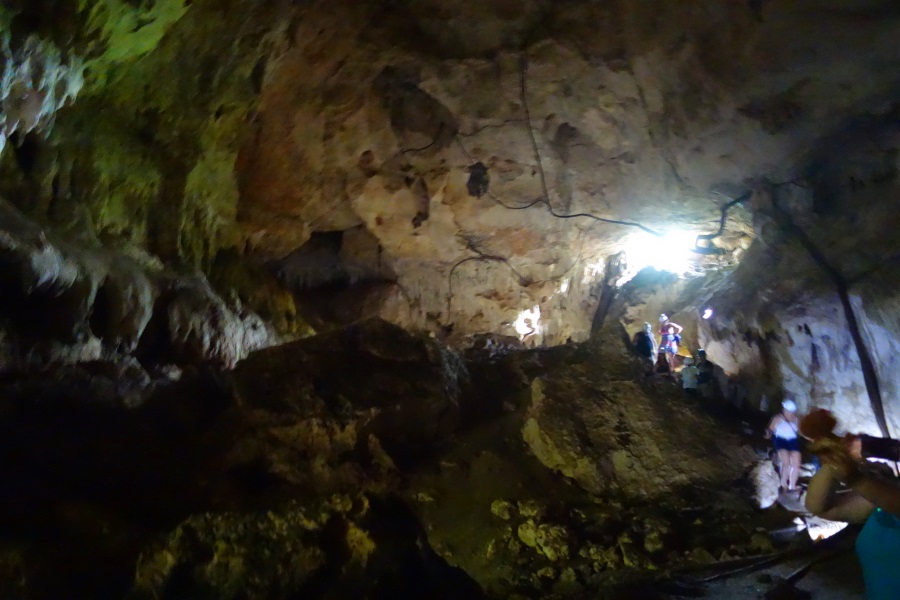 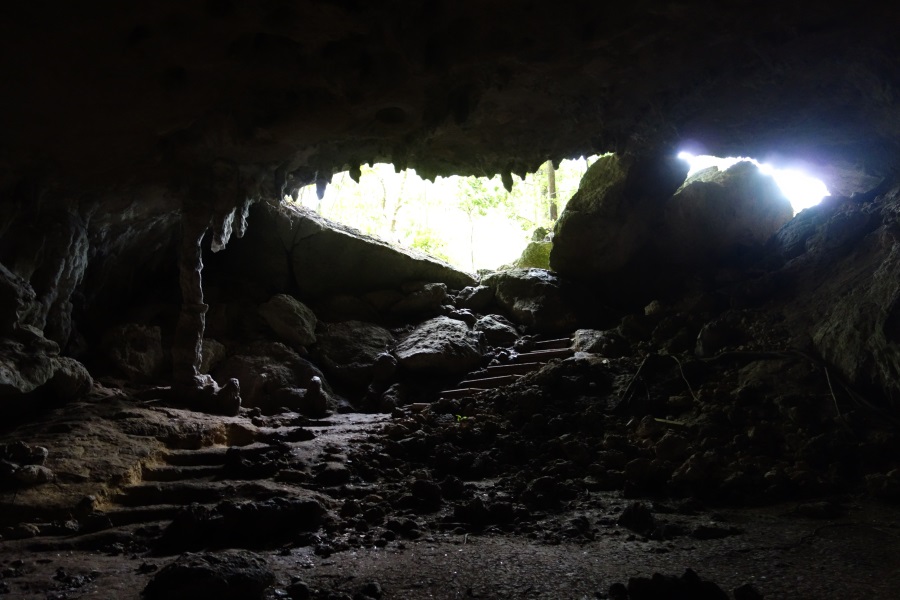 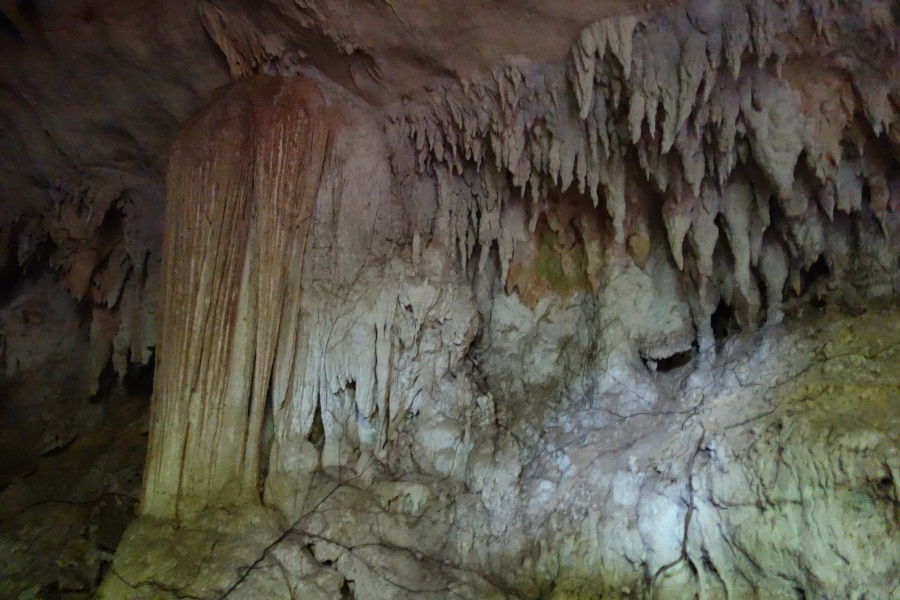 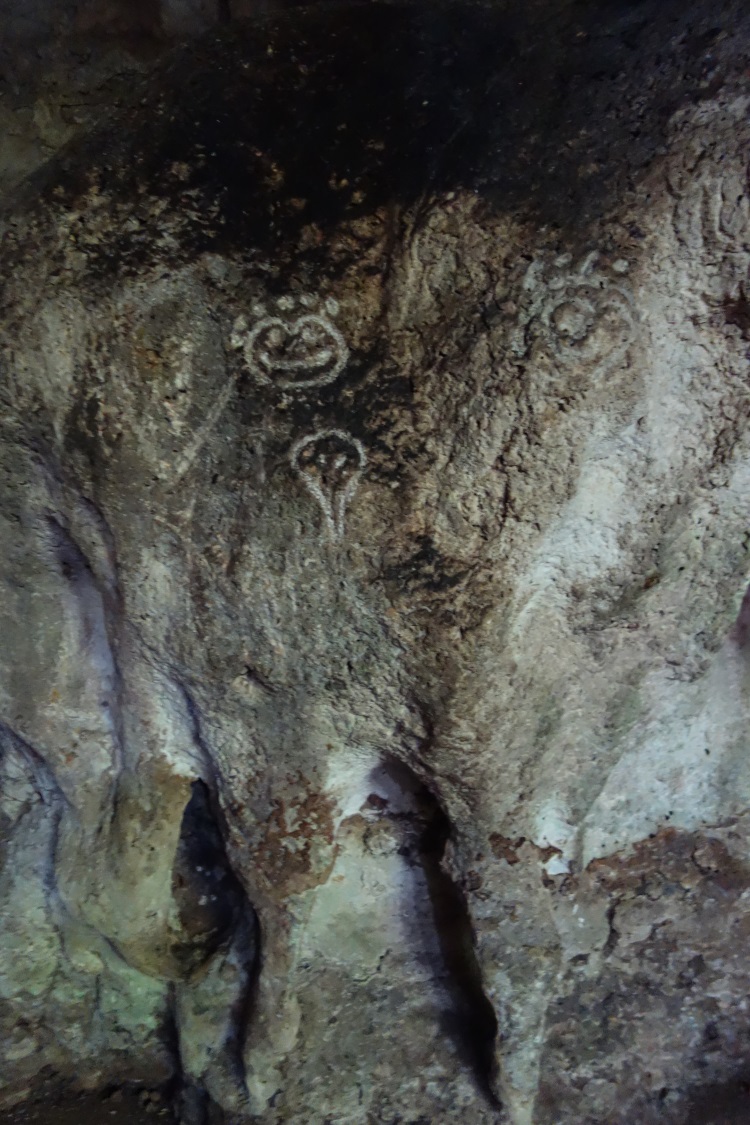 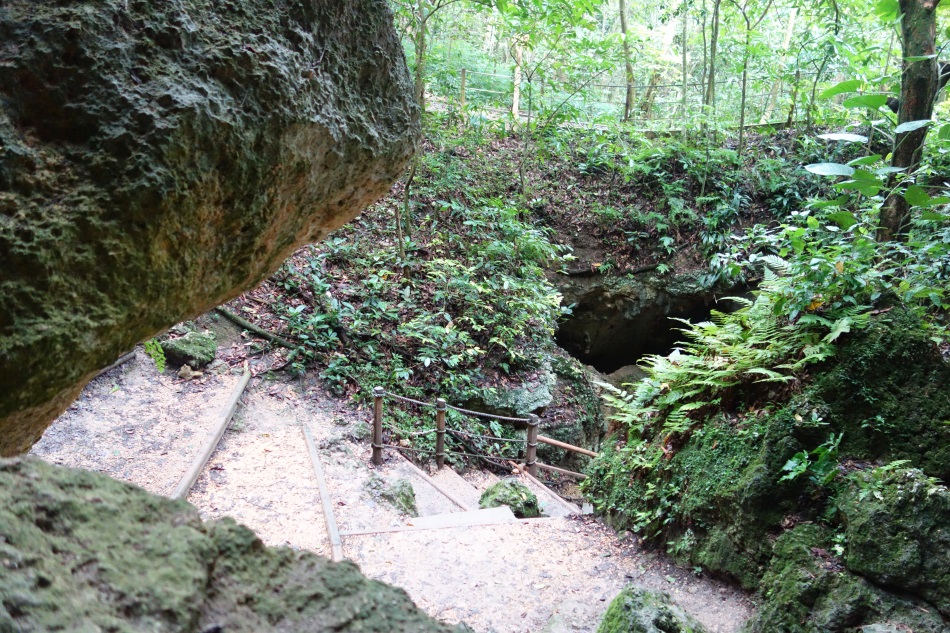 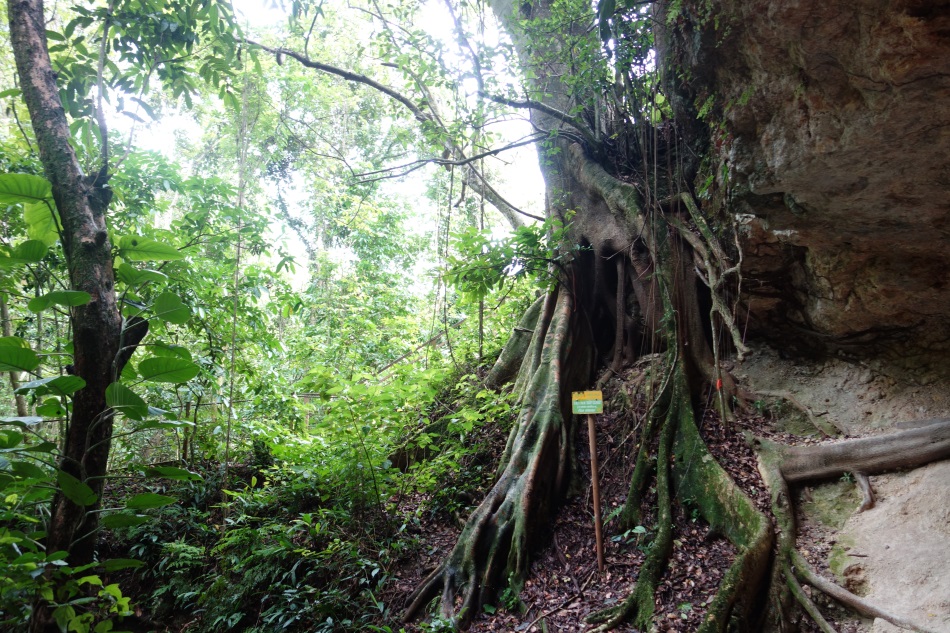 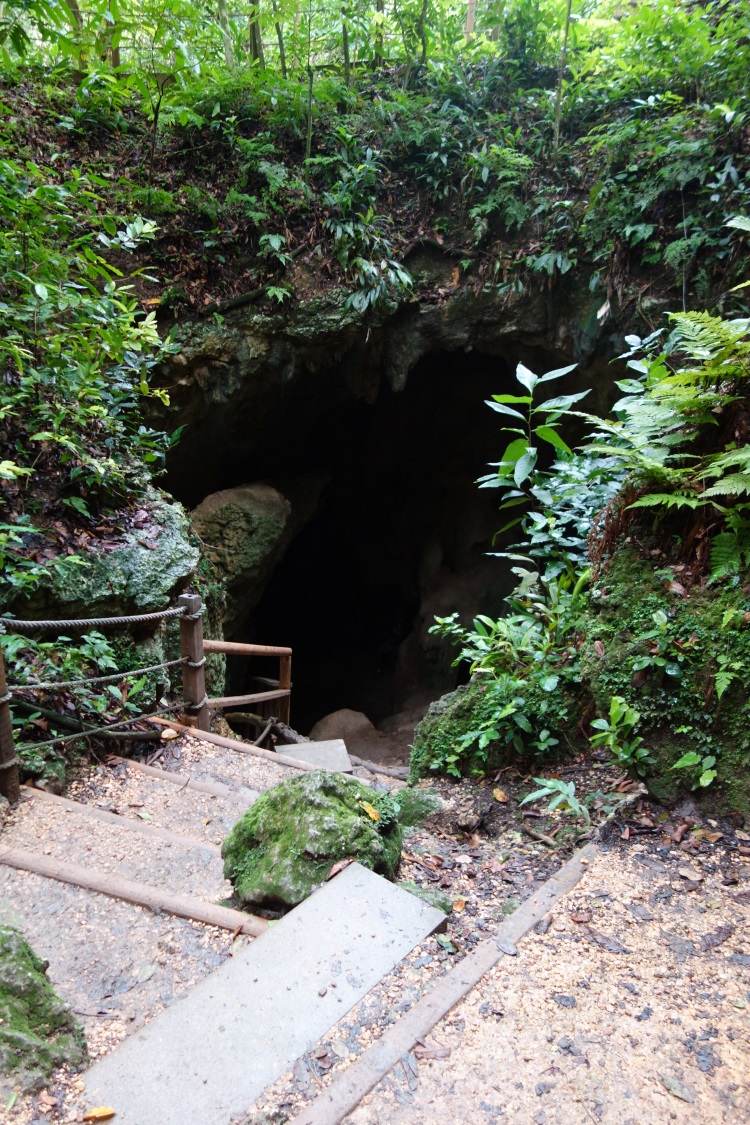 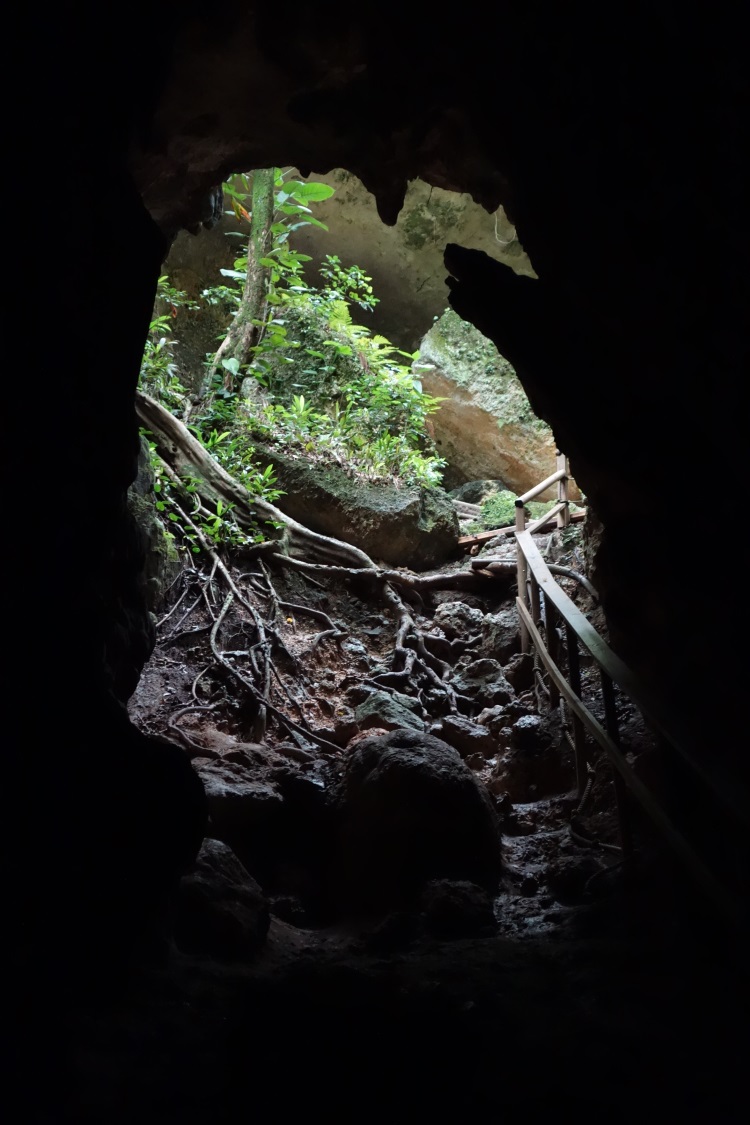 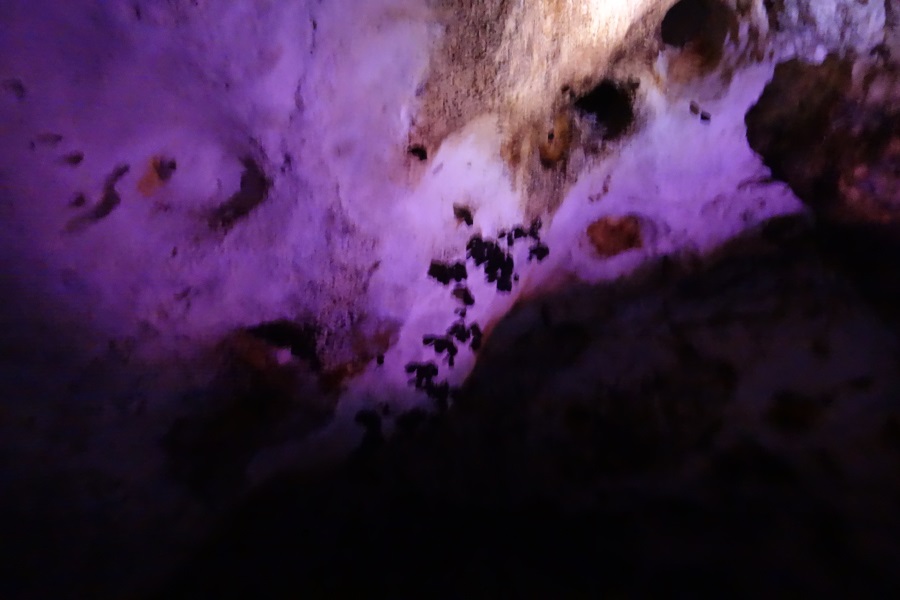 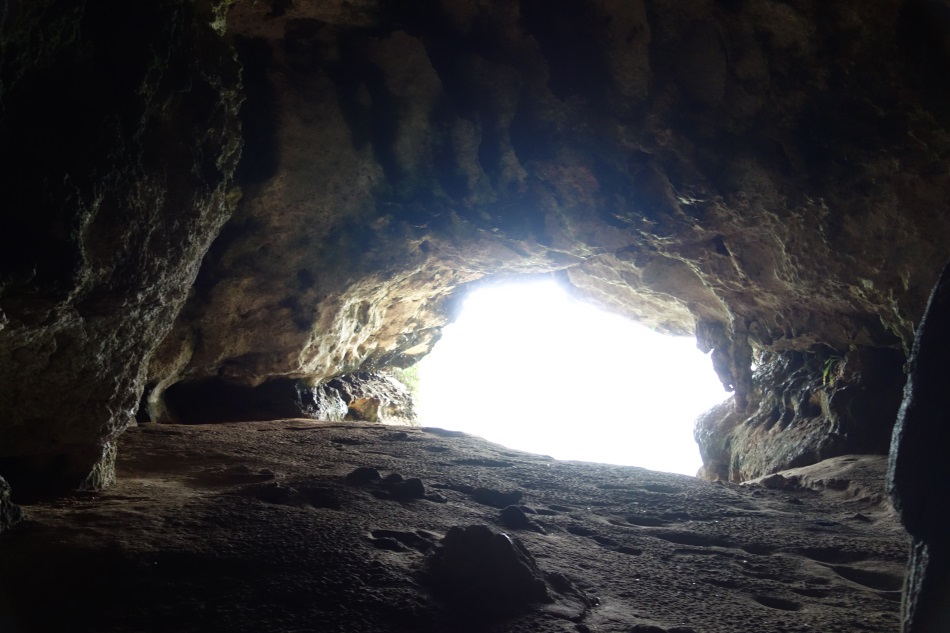 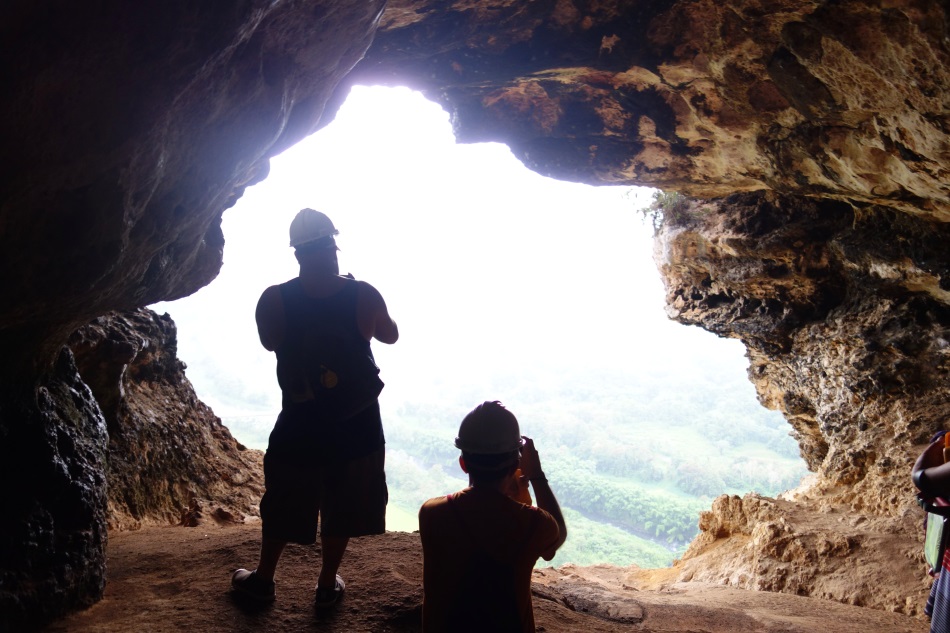 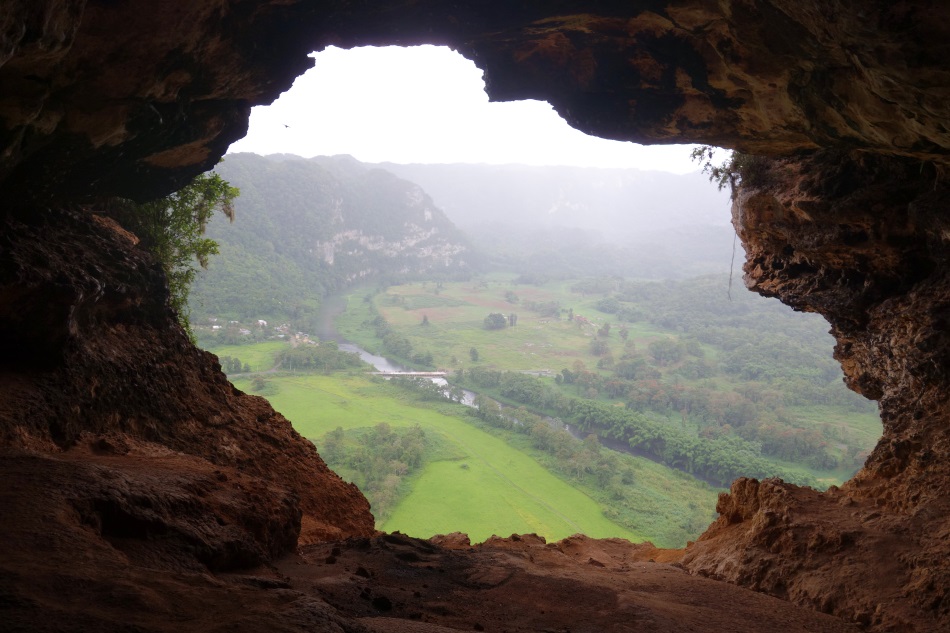 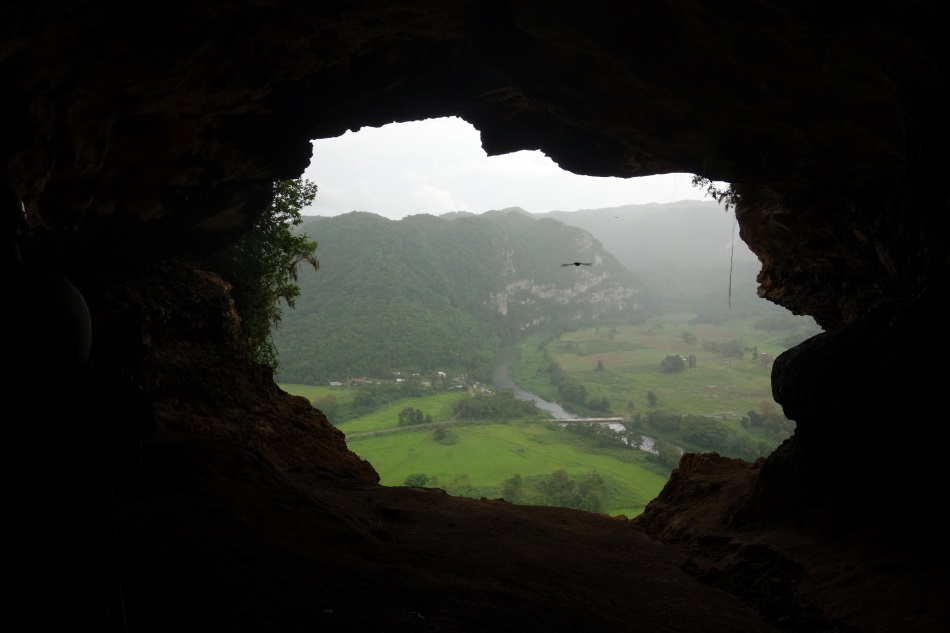 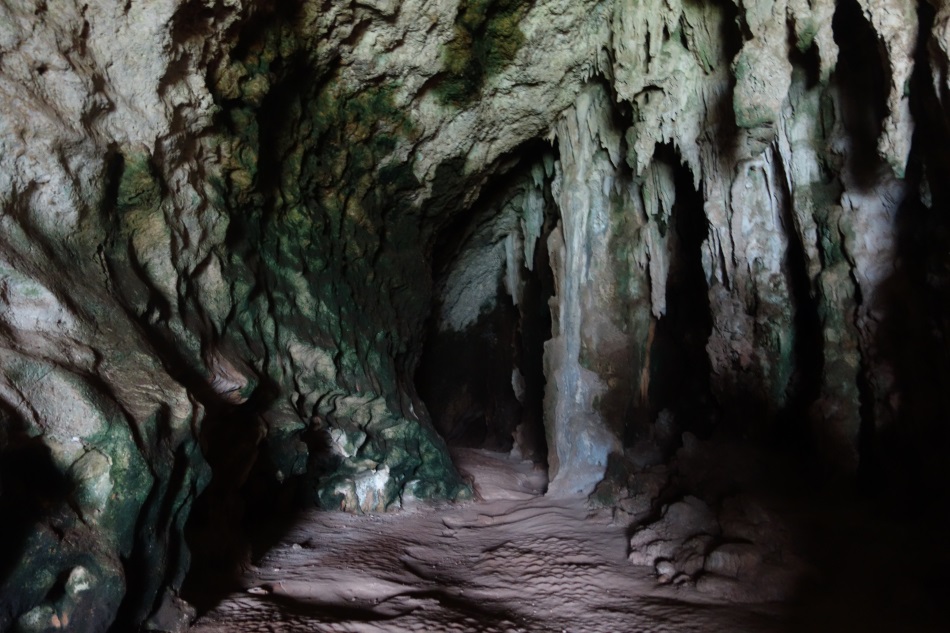 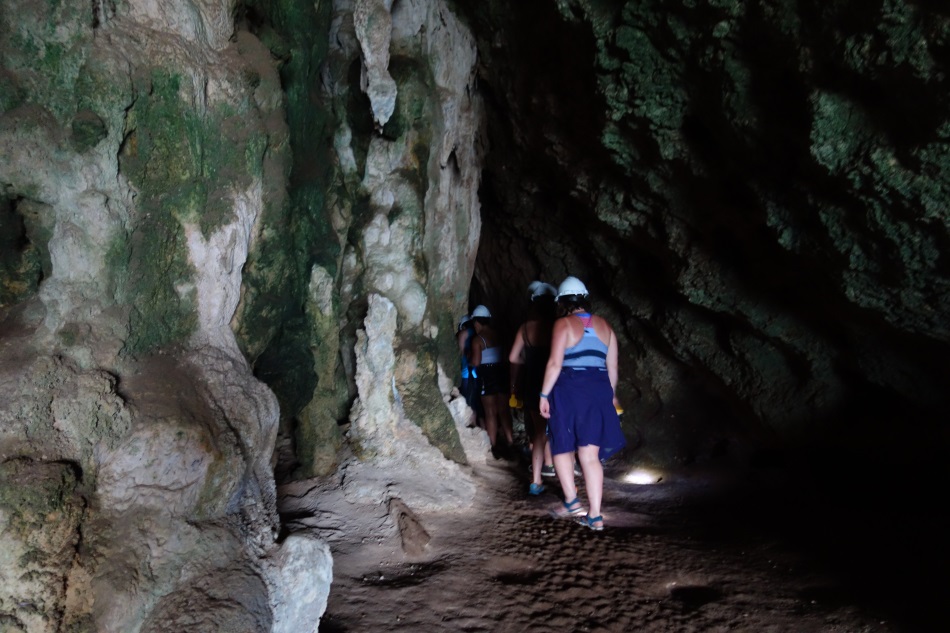 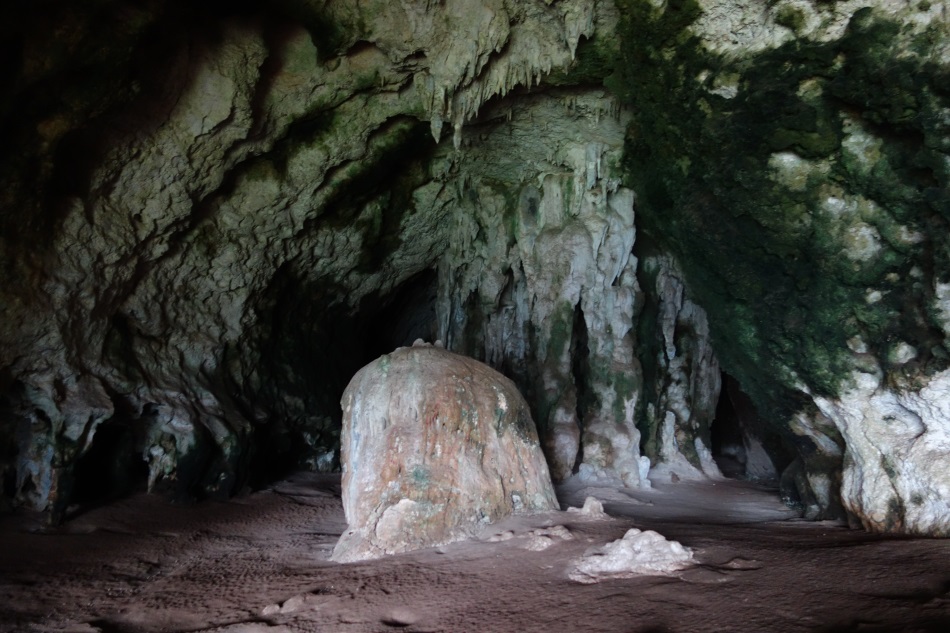 I was glad I brought my raincoat, because when we came back out of the cave the Rain Gods had unleashed their fury! A light breathable jacket is always good to have in the woods anyway to help prevent mosquito bites.

As always, use bug spray.