In the audience was Alex’s husband Simon Van Kempen with their son, Francois, Ice -T (with his entourage), Singer Kat Deluna, Tyson Beckford and Caroline Manzo’s daughter who all came out to show their support for those walking in the show as well as the Sachika Twins who put together a really fun and high spirited collection for Spring 2011. 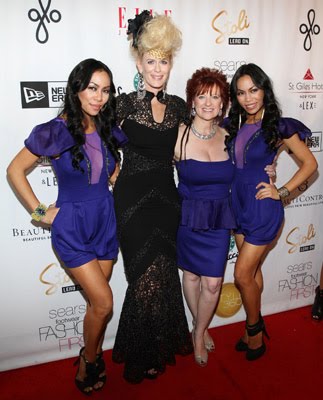 Sachika’s Spring 2011 line included several cocktail dresses, parachute jumpers and a few evening gowns. The show opened with a traditional Vietnamese dance performance that illustrates the oriental woman transitioning into the modern woman.The inspiration for the collection was inspired by a Vietnamese vacation and the girls used several embellishments in their work such as detailed embroidery and fused oriental traditionalism with European chic.

The Sachika twins have a reputation for crafting beautiful dresses that fit “The Modern Woman” like a glove. “We are inspired by the female body…” says To-Tam. “Designing is finding the perfect balance between the imaginary mind and the reality of life…” states To-Nya. The SACHIKA twins also believe that “beauty resides in balance & contrast; The perfect balance between the feminine and the masculine, the curvy and the structural, the soft and the hard, the sheer and the solid, shiny and matte. ”

Some show stopping moments from the event-

When Coco walked the runway in a blue mini dress with a low cut, sheer back revealing a little more (Ok, ALOT more) than was expected – the audience first gasped in shock then burst into a mix of laughter and clapping.

When Alex McCord stepped out onto the runway, there was a minor glitch with the soundtrack – in true spirit, the Real Housewife strutted down the runway and received a standing applause as the music resumed.

At the end of the show, the Twins bounced down the runway hand in hand and then proudly displayed a young infant who was seated near the runway, sporting a little baby Mohawk. I am guessing the child was either a relative or that of a close friends.

Designers To-Tam & To-Nya Sachika have succeeded in building a high-end brand based in New York and their success has led to a growing popularity amongst celebrities and some of the most prominent A-listers. With their unique vision and original designs the SACHIKA twins have the ability to bring out the star qualities in every woman.

The Twin Tandem have a compelling story as identical twins with parallel reflections, fashion yin and yang, working together to build their SACHIKA empire. These young Vietnamese entrepreneurs moved to New York from Montreal, Quebec a few years ago to achieve the “Ultimate American Dream”. Inspired from their own lifestyle the SACHIKA brand was born. Their clothing exudes confidence, sophistication and captures the femininity of the body. The SACHIKA brand is establishing itself to be one of the most influential household names in the Fashion & Entertainment World.

This Fall proves to be a great time for SACHIKA following their show at NYFW with the prestigious Style 360 sponsored by ELLE.com, Elle Magazine & Alisamarianow.com. On September 14th at 2pm, all eyes, press/media were on the SACHIKA RUNWAY to witness the birth of their much anticipated Spring 2011 collection. The Twins had a surprise full lineup of celebrities walking for them and received an outstanding amount of press/media.

For inquiries about the show: shireen@sachika.com

“Whatever the mind can conceive, it can achieve.” SACHIKA Twins.

SACHIKA is not just a Designer Label. It is a movement. A movement that encourages women to be independent, strong and to go after their dreams. The modern woman is comfortable in her own skin & femininity. She’s in control of her life & destiny. She knows she can make anything happen.

More about the twins: To-Tam aka “the righty,” is a musical maestro with a mind for business. She handles the marketing and sales division of SACHIKA. While To-Nya, aka “the Lefty, is the more artistic of the two. Her creative decisions and original designs are what shine on the fashion forefront. They are two sides of the same coin. Born to Vietnamese parents, just five minutes apart in Paris (France), but bred in Montreal (Quebec) as the eldest of six children. To-Tam graduated with high honors from the University of Montreal with a Bachelors Degree in Communications & Journalism; while To-Nya graduated with top honors distinguishing herself as the highest ranked student of her program at the renowned International Academy of Design & Technology. Their goal of founding a clothing label and their passion for style made New York City the ideal destination to pursue their ultimate dream.

Taking only the bare minimum, the twins took a chance and moved to the big city in search of opportunity. As cocktail waitresses and real estate agents (Citi Habitats) working in the hustle and bustle of the big apple, the twin designers were inspired to create a brand to answer the clothing needs of the active woman. Staying trendy, sophisticated, and comfortable while constantly on the move was a challenge- a challenge that sparked an idea… and in a short time, SACHIKA was born. And it is through hard work and double the determination, their dreams of revolutionizing the dress continues today with no signs of slowing down.

SACHIKA in Japanese means: “more wishes, more fortune, and more happiness.” It is a tribute to their parents who owned and operated restaurants specializing in fine Japanese cuisine- so these sisters are no strangers to flavor.