One of the first events I ever attended after moving to New York was a gala, hosted by Zac Posen and Uma Thurman, held at The Lincoln Center! So this season, it was a special treat that I would be seeing Zac Posen once again at the Lincoln Center – in a way it felt as though I had come full circle.

Zac is one of my favorite designers for so many reasons -his strong, feminine aesthetic is often combined with flirtatious colors and playful silhouettes made to fit the curvaceous woman as well as the slender. Some of Zac Posen’s celebrity fans include Natalie Portman, Rihanna, Kate Winslet, Cameron Diaz, Jennifer Lopez, Mischa Barton and Beyoncé Knowles. Other celebrity fans who could be seen sitting front row included Claire Danes, Carmen Electra, Estelle, Shenae Grimes, Kristin Cavallari, Michelle Trachtenberg, Kimora Lee Simmons, Russell Simmons and Jamie King

Backstage, Zac Posen talked with press about his decision to give his lower-priced line its runway debut. “This is fashion-tainment!” he said. “I wanted to create that dialogue with the bloggers and the fans.” Well put Zac, well put!!!*;-) 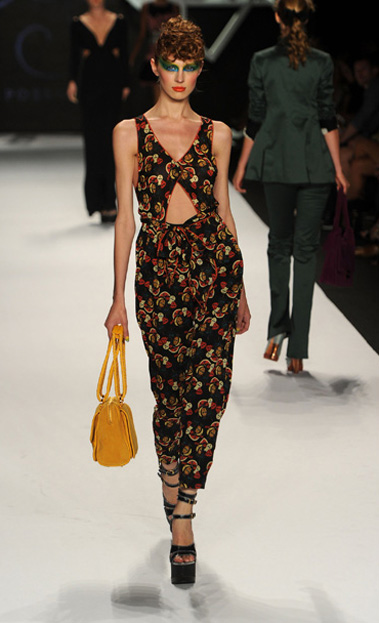 This season’s collection saw cinched waists, hourglass tops, plunging necklines, peek-a-boo cut-outs and lots of playful prints! Ruffles and lace were given an edge and the models strutted the runway in punk glam, bright red lips, colorful shadows, sparkling sunglasses and platform heels which Posen collaborated on with Steve Madden. 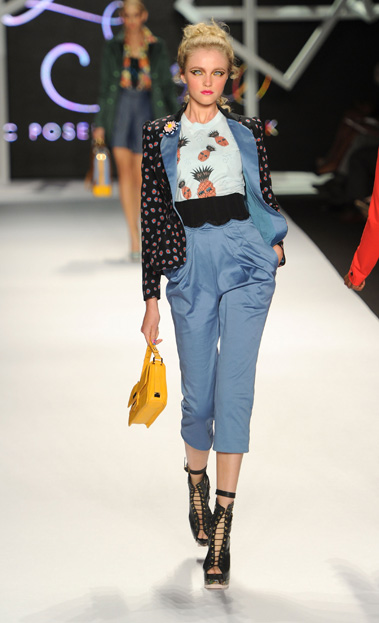 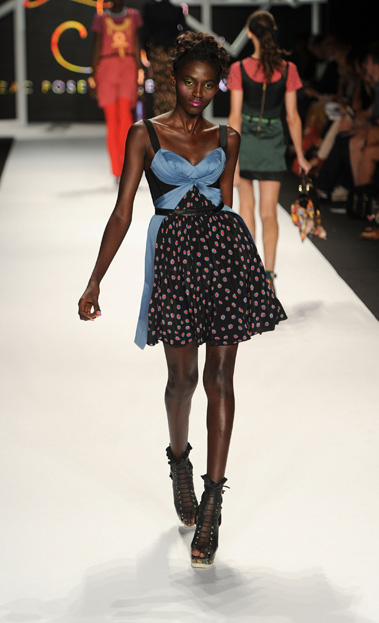 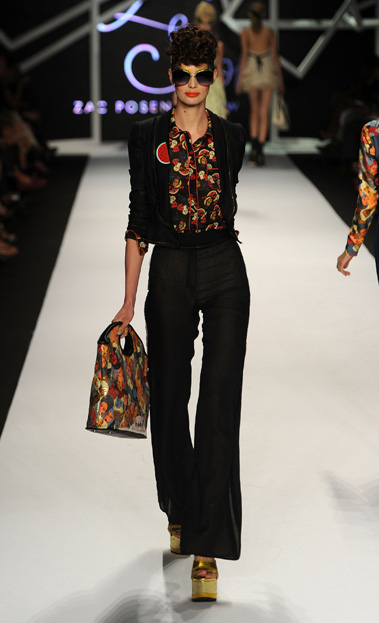 The models danced down the runway spinning and twirling … One model, 18-year-old Ataui Deng, went down after her twirl but got right back up and continued walking. In high spirits, she received a big cheer from the crowd. 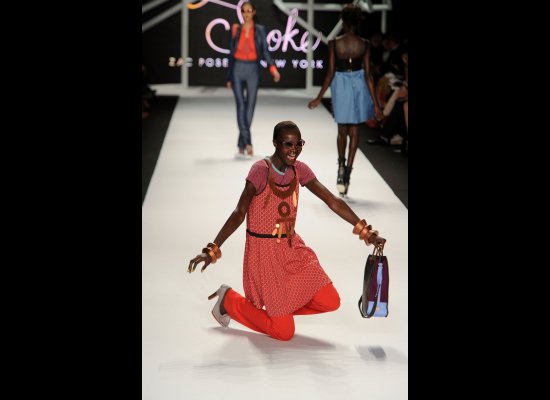 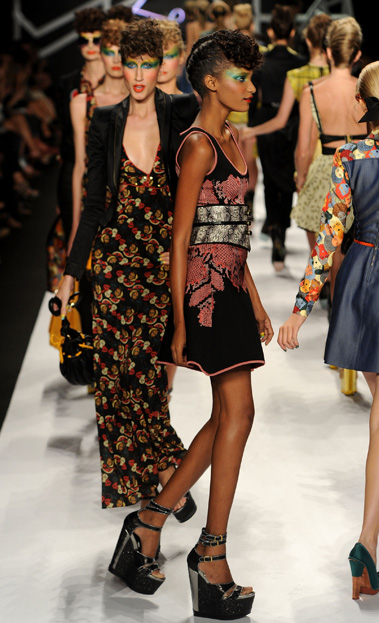 I love the print on the dress seen below!!! 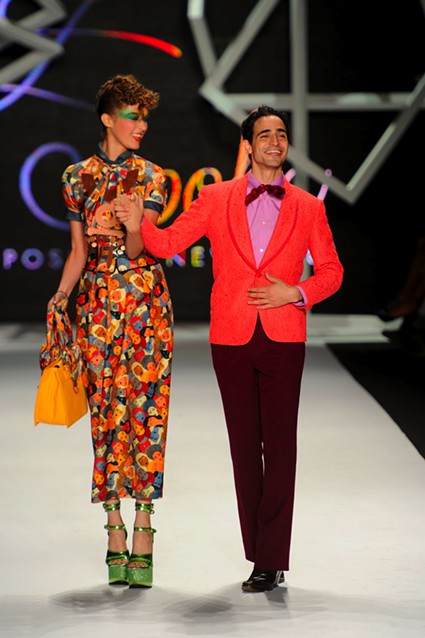 Posen was raised in the SoHo neighborhood of lower Manhattan, the son of artist Stephen Posen and corporate lawyer Susan Posen. His interest in fashion design started early, and as a child he would steal yarmulkes from his grandparents’ synagogue to make ball dresses for dolls. At age 16 he enrolled in the pre-college program at Parsons The New School for Design. For three years Posen was mentored by curator Richard Martin at The Costume Institute of The Metropolitan Museum of Art. At 18, he was accepted into the womenswear degree program at London’s Central Saint Martins College of Art and Design at the University of the Arts London.

In 2000, Posen received a big break after a dress he made for Naomi Campbell.

Upon returning to New York in 2001, Posen set up an atelier in his parent’s living room, while they gave him a USD$15 allowance. In October of the same year he was chosen to present a capsule collection as part of GenArt’s Fresh Faces in Fashion New York 2001. He received a grant for USD$20,000. His first runway show was in 2001. Following the success of this presentation, Posen established his design studio in Tribeca. Zac Posen continues to receive awards and accolades, most notably the Council of Fashion Designers of America’s 2004 Swarovski’s Perry Ellis Award for Womenswear.

In 2004, rapper and clothing designer Sean Combs made an investment deal with Posen. Ashley Olsen interned with Posen in 2005.

In April 2008, Posen’s capsule collection created in collaboration with Target, Zac Posen for Target, was released in 75 stores in Australia. A preview of the collection was shown during March’s L’Oreal Melbourne Fashion Festival as one of the fashion week’s headline catwalks.