As a fashion designer, Miele always presented the popular culture of his native country abroad. His designs transcend the influences of his Brazilian roots reconstructing them for new audiences. The designer also distills a variety of urban environments, drawing inspiration from very distinct groups of women: cosmopolitan, sophisticated and independent – becoming clearer that life’s frontiers are imaginary.

For the past 7 years, Carlos Miele has dedicated himself only to his fashion work. In 2001, he started showing internationally in London and since 2002, has been showing his collections in New York. 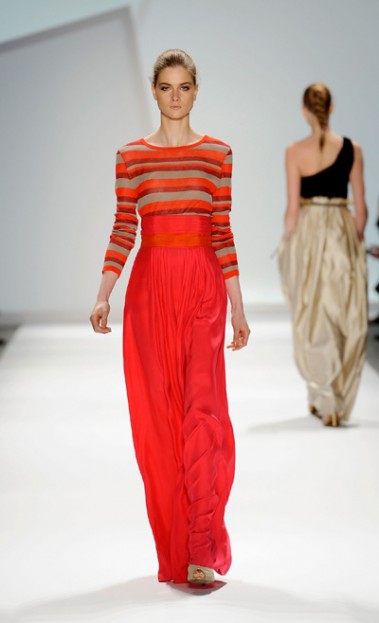 His collections reflect his experiences working in Sao Paulo, New York and Paris. Miele is considered by Suzy Menkes, from The International Herald Tribune, as the “master of fiery color and pattern” and “master of the delicate craft and intricated detail”. For Virginie Mouzat from Le Figaro, “Miele presents precious and ultra-feminine gowns with prints – the Brazilian designer’s specialty, easy to imagine on a red carpet”. The positive results are also reflected on sales at important stores in 24 countries and among celebrities such as Camilla Belle, Sandra Bullock, Sarah Jessica Parker, Jennifer Lopez, Beyonce, Heidi Klum, Eva Longoria-Parker, Alicia Keys and Brooke Shields.

Read More and See More Photos After The Jump…

In 2007, Carlos Miele launched his casual line, Miele, which has outfits for different occasions but also incorporates the cutting-edge technology and the Brazilian handwork always used in an innovative manner in the designer’s signature label. In May, Carlos Miele launched his Premium denim line called Miele Denim, designed and produced in Brazil to take the international market. The collection is available at the designer’s stores in New York, Paris and Brazil and also in department stores and boutiques stores in over 20 countries.

The designer’s amazing ability to mesh a strong fashion vision and social conscience has allowed him to develop important partnerships with artisan cooperatives from several regions of his native country. Carlos Miele brings Brazil’s beautiful handcraft techniques that were slowly being lost and forgotten to fashion, creating a connection between two worlds that would normally never find each other. The designer also created an international project with the Rainforest Foundation – US, started by Sting and Trudy Styler, in 1989. Miele invited supporters such as Scarlett Johansson, Michael Roberts, Camilla Belle, Rachel Zoe, Alice Braga, Carol Trentini and Diana Picasso to create special T-shirts which proceeds were donated to benefit the Foundation’s supported programs in Brazil, helping the rainforest’s preservation and asserting the rights of indigenous and traditional peoples who call them home and have protected them for millennia.

In June of 2003, Miele opened his first flagship store in the Meatpacking District, New York, which received many awards as the “Store of the Year” and became one of the city’s references of contemporary architecture as published in several architectural publications. Created by the architect Hani Rashid, from Asymptote, the store represented the city of New York at the International Biennial of Architecture and Design and was defined by the The New York Times as a “dream landscape”. In November 2007, Carlos Miele opened a store at rue Saint-Honoré, in Paris, also projected by Hani Rashid. The space takes inspiration from a combination of influences including Brazilian masters Oscar Niemeyer and Roberto Burle Marx and their interest in abstract figurative affinities, the French Baroque and Parisian Art Nouveau.

In Brazil, Miele has designed his Sao Paulo flagship store, a space with nearly 800-square-meter, concluded last November, much like he designs his signature dresses, as a three-dimensional figure. In other words, it was largely carved in situ, given the difficulty of representing Miele´s concepts on a plane surface. The store reflects Miele´s passion for combining the natural and the high-tech, the result is an unpredictable space, a swirling series of warped, embracing bays and coves that pulls visitors along a meandering course, away from the repetitive, rectilinear spaces that are typical of the street. The store’s architecture is directly related to the proportions of the human body, space and time as noticed by French philosopher Gilles Lipovetsky (author of The Empire of the Ephemeral and Hiper-Modern Times) on an interview to the Brazilian newspaper Folha de Sao Paulo: “The interesting thing about this store is to see how Carlos Miele has built the label’s identity through the sensuality of the space, full of sinuous curves. It is like we are getting inside a women’s body. Luxury, today, needs to invent. Labels cannot simply make products. They also need to construct ambiances that create the label’s experience. That integrates architecture, art, design, commerce and nature”.