Halloween at the Playboy Mansion in Los Angeles

For starters, Happy Halloween everyone!

I know New England got hit with a crazy amount of snow which is kind of putting damper on the holiday. Especially, given the power outages that came along with the snow. I hope that doesn’t stop everyone from getting dressed up and in the spirit!

To celebrate the Halloween weekend, I headed out to Los Angeles for the annual Halloween party at the Playboy Mansion. It was really fun to get another chance to walk through Hef’s private zoo, which includes the cutest, little monkeys and being spooked by actors hidden in the bushes. The decorations were extremely over the top – in a really great way – and there was even a haunted house that consisted of room after room of scary scenes. One of my favorite parts of the haunted house was a room that was set up to give the feeling of walking across a plank that was high above a dirty and haunted looking room. Mirrors were expertly positioned to create an experience of being a hundred feet or so above the ground – even though I realized pretty quick it was a mirror floor and that I actually couldn’t fall, it was still really scary and played with my head! There was also a really cool wall of masked bushes that every once in a while, one of the masks would jump out at you. I definitely screamed more than a few times which partially explains my laryngitis this morning. 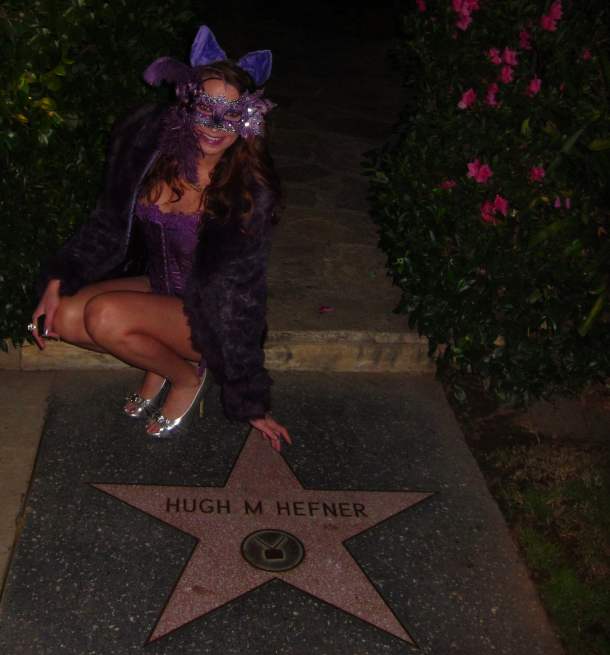 Another contributor to my raspy voice was the great names headlining the mansion. Friday night, ATB performed while the EC Twins and LMFAO kept the party rockin on Saturday. Keeping the party going, there were servers walking around with C02 cocktails that were perfect for Halloween! There were also several top shelf bars throughout the event as well as two buffet areas with food like pesto shrimp, coconut shrimp, a chicken dish, a noodle dish, steak skewers, salad with garbanzo beans, a coffee & dessert table with yummy treats like chocolate covered strawberries, etc. Everything was complimentary to Mansion guests and exclusive ticket holders. 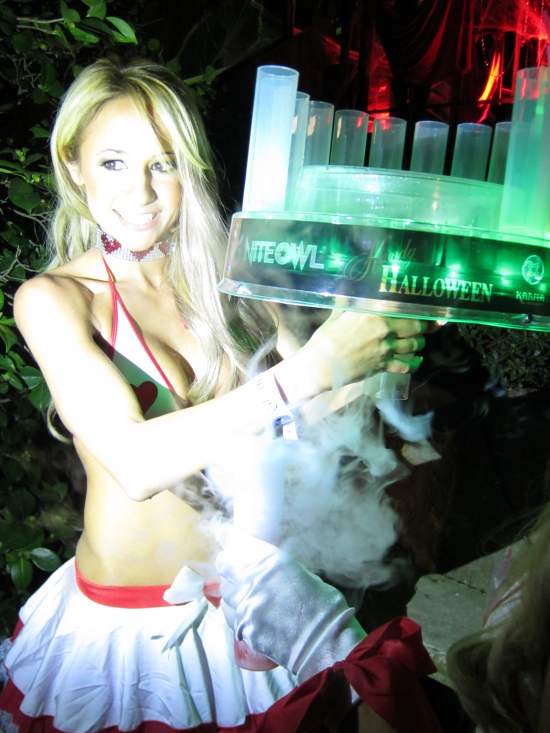 Halloween at the Playboy Mansion

While dancing on the main floor was so much fun (as was exploring the haunted grounds including the popular game room which features plenty of Playboy Pin Ball machines), one of my favorite part about parties at the mansion is the Grotto! For the Halloween party, the Grotto was tented and also decorated with lots of ghosts and ghouls. Towards the end of the night, I headed in for a little dip in one of the heated jacuzzis that are inside the grotto. The jacuzzis connect to the cooler pool which has an opening to swim out to the main pool area – where the party is. There are plenty of fun pool toys like floats that make this a popular hang out spot for guests. While I didn’t want to wear my Halloween costume in, I made sure to bring a sexy swimsuit just for this part of the evening. 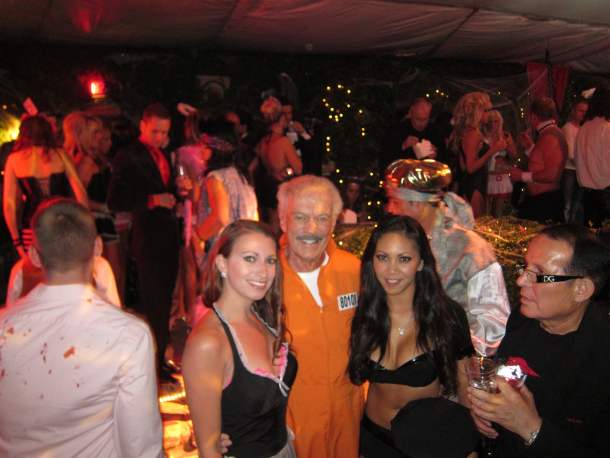 While at the party I got to see Hugh Hefner, who was dressed as a referee (or maybe a jailbird – his costume had black and white stripes) and was constantly surrounded by a ton of girls, and his brother Keith, who was dressed as a prison convict and came to the party both nights with the same girl. Not sure who she is or if they are dating – in retrospect, I wish I had asked, just out of curiosity. All in all, the event was AWESOME and a great excuse to come to Los Angeles for a little Halloween fun in the sun.