For our most recent trip to Las Vegas, we stayed at the Palazzo Resort and Casino.

The property’s design is marketed as being reflective of a modern European ambiance and luxury living with some of the largest standard accommodations on the Las Vegas Strip! 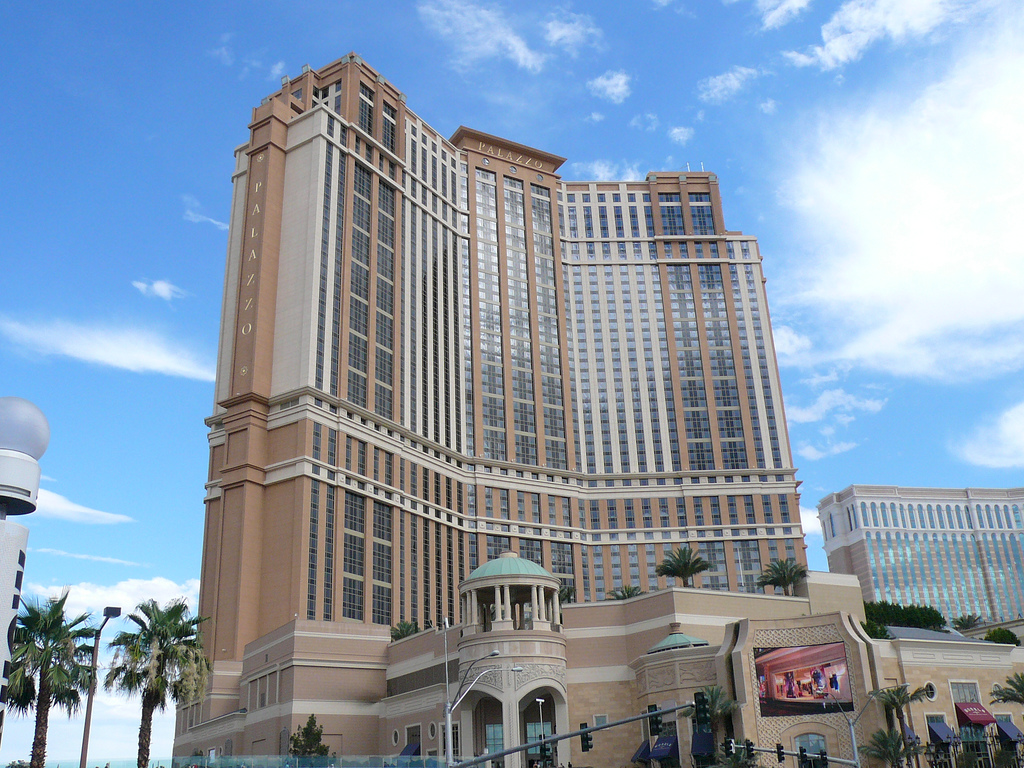 With a large, luxury suite and a sweeping view of the strip and mountains, The Palazzo‘s accommodations are spacious and comfortable. Although, the luxury suites do not have jacuzzi tubs or balconies (I wish they did), the suite bathrooms do have gorgeous marble flooring, his and her sinks, a vanity table, a separate area to change, and plenty of room to get ready in style.

Additionally, several five star restaurants are located on the property, plenty of nightlife, a casino, and over 7 sparkling pools, 2 of which are private and adult only.

(The Palazzo is located on the Las Vegas Strip, between The Wynn and The Venetian, and across from Treasure Island .)

During our stay, we rented a cabana at Tao Beach, which is one of the pools located on The Palazzo‘s shared property with The Venetian.

The cabana was air conditioned, had Evian water misters, a fully stocked refrigerator, a giant flat-screen TV, and plenty of goodies to choose from off the menu including blackberry Mojitos, a lemongrass crush, and delicious food like tuna sashimi and peanut chicken and teriyaki beef satays. Also, the pool was full of pool toys and had a slamming electronic dance music mixed with pop, like David Guetta and Katy Perry.

While in Las Vegas, we also saw a few shows including Peepshow with Holly Madison, Absinthe with Angel Porrino, and La Reve.

Each of the shows was incredible for different reasons.

Peepshow was a fun burlesque show starring the former Girl Next Door’s Holly Madison who plays Little Bo Peep in the show. The storyline is based around trying to find her a true love and involves plenty of humorous commentary interlaced with singing, pole dancing, and even some aerial theatrics.

Holly Madison takes the stage as a timid girl who is guided by the Peep Diva in her transformation into a confident, sensual woman. The show carries the tagline “The sexiest new show on the planet” and has a theater at the appropriately named Planet Hollywood Resort & Casino!

I really enjoyed this show and afterward I stuck around to say hi to Holly and toast a glass of champagne! 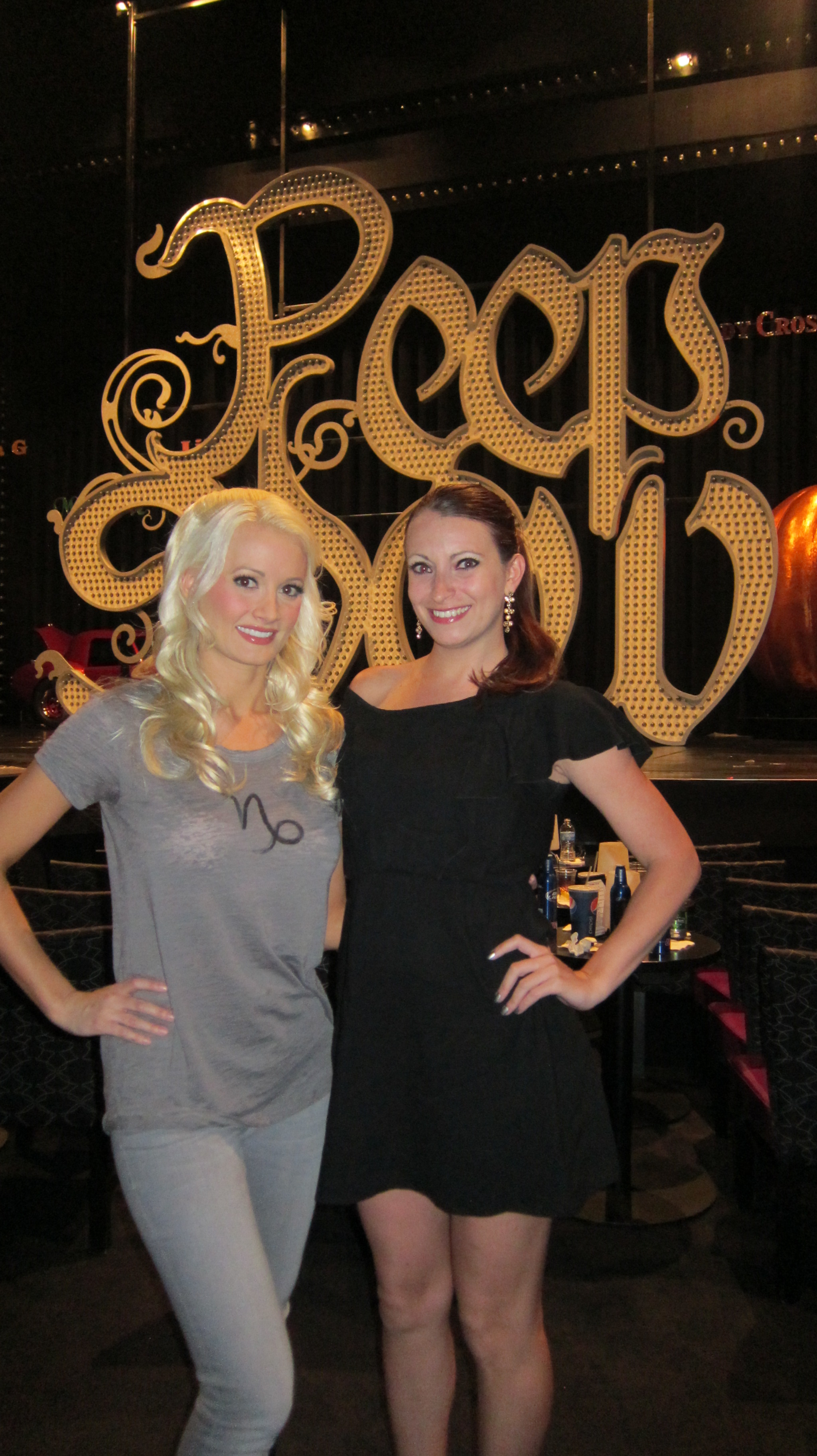 Me and Holly Madison

Absinthe was equally incredible, if not more so! Absinthe was sexy, funny, and even astounding at many times throughout the performance with a wide range of Cirque du Soleil like talent ranging from world-class rollerskating to contortionists performing amazing feats of strength, balance, danger and unfathomable flexibility.

[ad#Google Adsense]
The stage for Absinthe was smaller and set up in a circus like tent, which initially turned me off to the show as I generally don’t like ‘circus-y’ type shows. Absinthe was amazing, however and had some of the funniest performers that I’ve seen or heard in a long time though I must warn you that a lot of the comedy was very crude at times and often involved the audience members (but in a very witty way).

This video is from the very end of the show:

Holly Madison‘s bff Crystal Porrino has a tap dancing set in the show – it’s a creative and funny skit that is cute and sexy at the same time!

La Reve was just amazing. Hands down the best show of the three, though also the most expensive. We opted for VIP seats which included much more comfortable seating, television monitors with real time behind the scenes footage, and optional champagne and chocolate covered strawberries!

[ad#Google Adsense-3]
While these seats are furthest from the stage, they actually offer the best viewing point given the amount of aerial acrobatics and aquatic diving that takes place. The VIP seats are the highest and give you the perfect view of all the action – including the stuff you generally don’t get to see on the behind the scenes monitors. (Plus the seats closest to the stage are in the ‘Splash Zone’ which means you should bring a raincoat if you plan to sit there and who wants to get soaked and then have to walk through an air conditioned casino?) 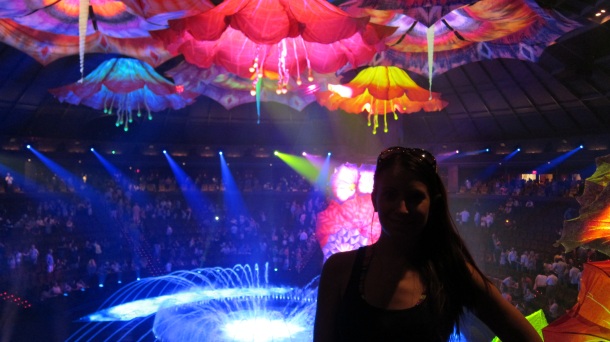 La Reve, similar to Cirque du Soleil’s O, is a water based show and I was able to see the performers preparing their next scene underwater while breathing through oxygen masks and also the scuba diving tech crew performing all the underwater set changes. It was really incredible! I never knew how much went on ‘under the water’ during one of these shows! 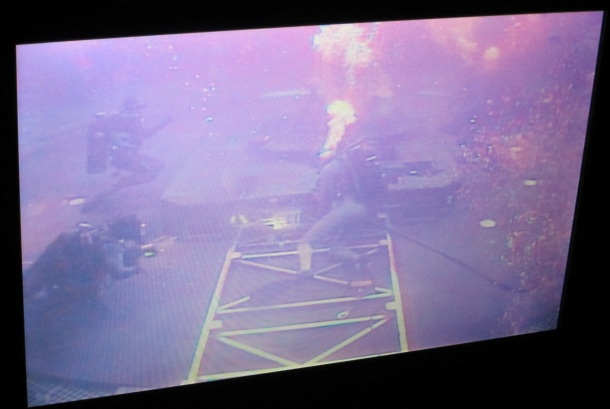 Scuba divers putting together the next set!

Another one of the amazing parts of this performance that many people don’t realize at first, is that all of the music is performed live. From where we were seating, we were able to sneak a peek into one of the three sound boxes located around the theater. Seeing the passion of a woman singing opera while dozens of acrobats swing and dive in the air, is absolutely breath taking!