It’s been several years since my first visit to Carlsbad Caverns (actually, over a decade), so it was safe to say that my memory of the giant underground park had faded some. I remembered the entrance – a gaping hole descending into the Earth, as well as the concession stand waiting for visitors at the bottom with snacks and souvenirs. But what I didn’t remember is just how massive this natural structure is! 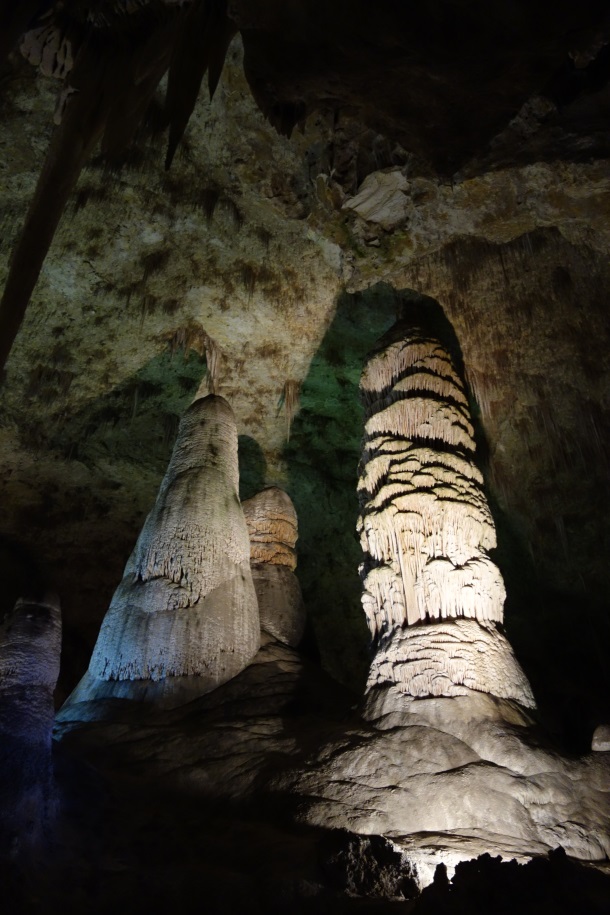 JC and I spent about 4 hours walking through the enormous cave and this was just one way in – we took an elevator back up! The walk down is a steep, winding trail that allows time for your eyes to adjust to the dim lighting. The first thing I noticed was the drop in temperature – while high 80’s on our walk to the cave entrance, it wasn’t long before the temperature dropped to the 50’s. (Thankfully, I had read some reviews so I knew to bring a jacket and wear sneakers and long pants.) 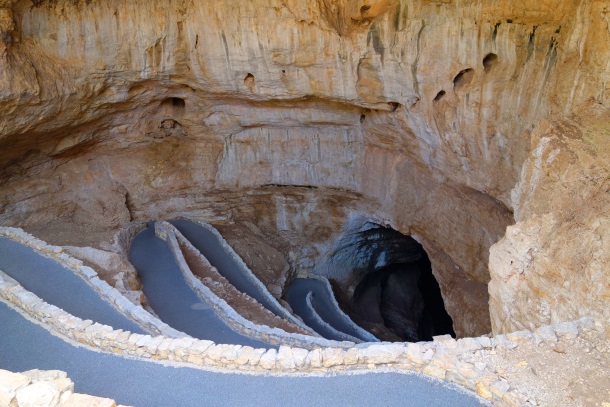 The second thing I noticed was the sounds of water dripping and the fluttering sound of wings flapping on the caves ceiling, accompanied by a high pitch squeak – bats! At night they flock out of the cave, by the thousands, but for now they slept upside down inside the cave and would occasionally flutter around. I only saw a few since most of the bats sleep deeper in – I believe in a room not open to the public. As we climbed further down there were plenty of stalactites and stalagmites casting strange shadows on the cave’s walls. 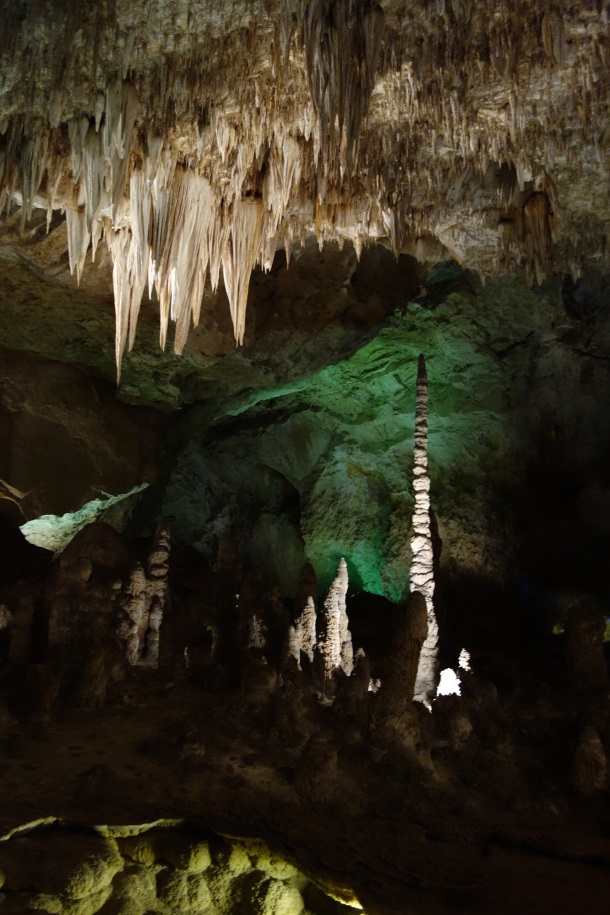 At several times during the walk, it was impossible to see how far down you would be climbing. Aside from the occasional steepness, the path is pretty easy to walk. It’s paved with a constant rail to hold onto and is lighted for guidance. There are optional, guided tours, some which visit additional rooms of the cave that are not open to the public, but JC and I opted for the self guided audio version, which allowed for us to go at our own pace. 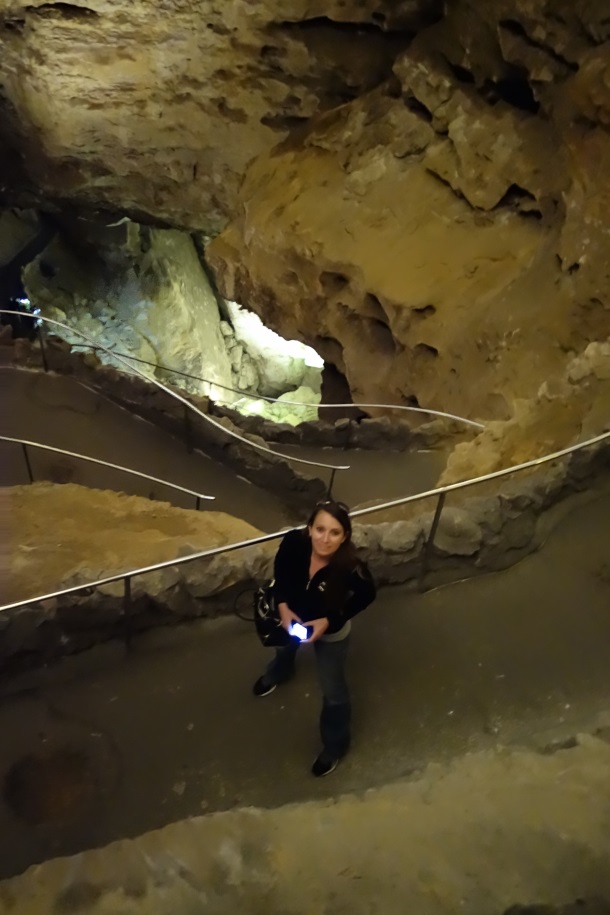 Early visitors and explorers had a more rigorous climb down…some of the old structures are still in place! 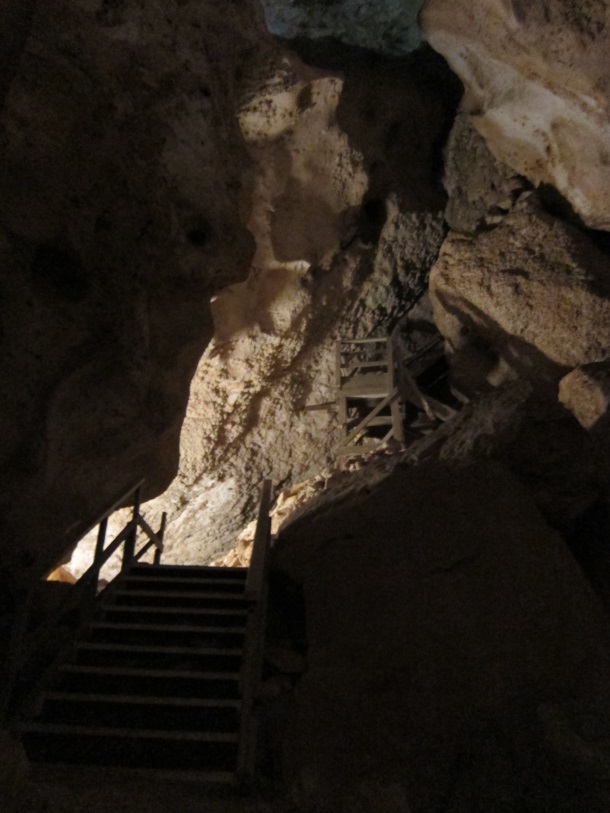 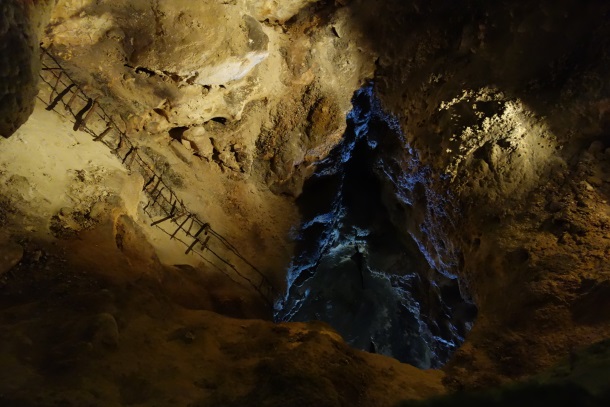 Concession stand at the end… 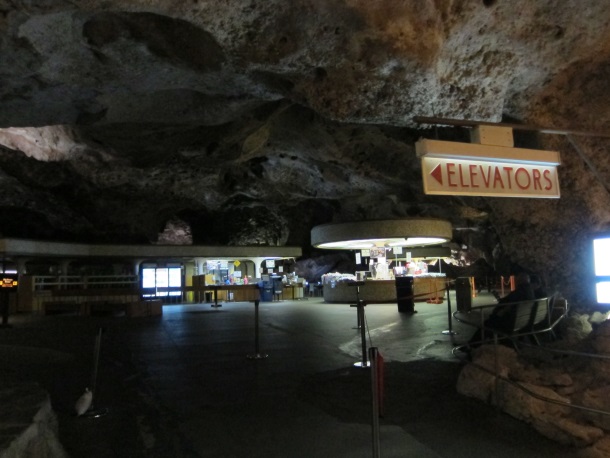 About: Carlsbad Caverns National Park is located in the Guadalupe Mountains, a mountain range that runs from west Texas into southeastern New Mexico. Elevations within the park rise from 1,095 meters (3,595 feet) in the lowlands to 1,987 meters (6,520 feet) atop the escarpment. Though there are scattered woodlands in the higher elevations, the park is primarily a variety of grassland and desert shrubland habitats.

The Chihuahuan Desert is the largest and wettest of the North American deserts. Most of this desert is in Mexico, but the park is one of the few places where it is preserved and protected. The park averages more than 36.6 cm (14.4 in) of annual precipitation and has a semiarid, continental climate with mild winters, warm summers, and summer rains. The mean annual temperature is 19ºC (63ºF).

The park supports a diverse ecosystem, including habitat for many plants and animals that are at the geographic limits of their ranges. For example, the ponderosa pine reaches its extreme eastern limit here and several species of reptiles are at the edges of their distributions.