Good food and great wine go hand in hand and I am always happy to partake in events such as the wine pairing I attended on Tuesday to sample wines from the Catalunya Region. This particular pairing included a presentation on the history of the wine from sommelier, Josep Roca; (although, better to say wine waiter as he prefers to define himself)!

Josep Roca was born in Girona 1966, and studied at Hosteleria School in Girona. He is the co owner, with his brothers, Joan and Jordi, of the restaurant El Celler de Can Roca, which was awarded with 3 Michelin stars and 3 “soles” at the Repsol guide and the Best second restaurant in the world for Restaurant Magazine. Besides all this, he devotes his time to The Moo at the Omm Hotel in Barcelona, and the Mas Marroch. These are merely a few of his accolades, (see more below), and I was honored to enjoy a 12 course wine pairing led by someone of Josep’s expertise.

The Menu of El Celler de Can Roca in Girona, Spain as interpreted by Mercat, New York City 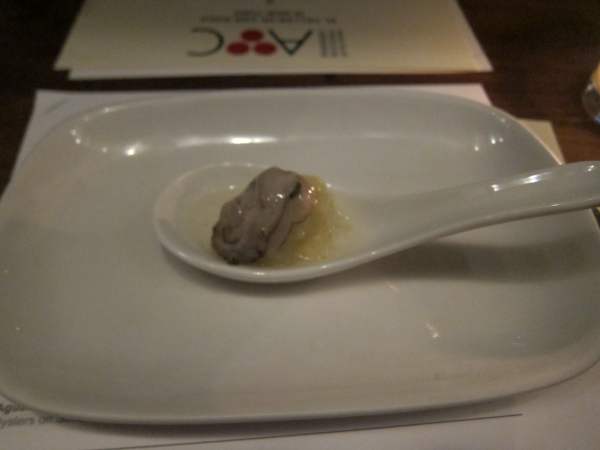 Notes: Catalunya is the second largest winemaking region of Spain after La Mancha and it is the only region where Spain’s sparkling cava wines are produced. This pairing had lots of small bubbles with a nice fizz and was a nice start to the 11 courses to follow! 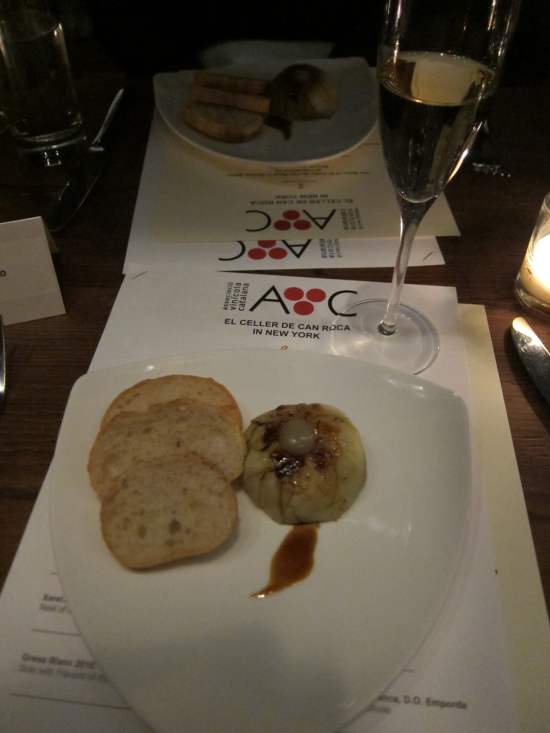 Note: The sparkling wine had a refreshing finish and paired well with this dish, which also was remarkably delicious. Though I’ve been unsure of trying foie gras for quite some time now (I had managed to avoid the dish on many occasions), I was in a rare mood and wanted to try it! Besides, I already had two delicious (half) glasses of sparkling Cava wines. I’m glad I did – it was one of my favorite dishes of the night. The pear wrapped, foie gras, was the perfect mix of sweet and salty and the texture was perfect for spreading onto the baked tostini. 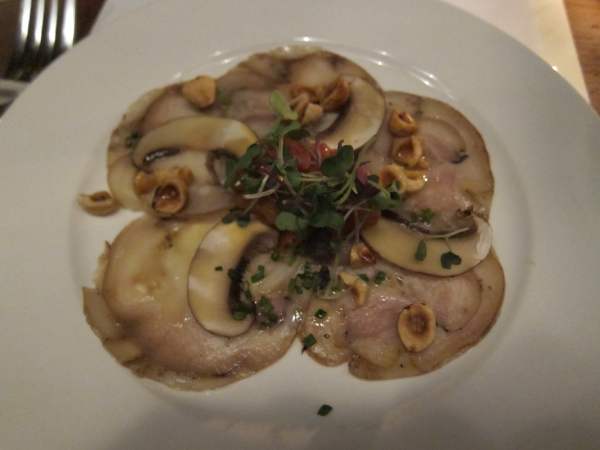 Note: The word cava is derived from the Latin word ‘cavea’ and means ‘cellar’ or ‘cave’ in Catalonia, where most Cava is made. The Catalan tradition of ageing wines in underground cellars was what led Jose Raventos, the first known producer of Cava, to choose this name. I’ve tried pigs feet carpaccio once before and was hesitant to try it again. Between the idea of eating pigs feet and the gelatin-ized texture of this dish, it was my least favorite. Although, this being my second time around, I am beginning to see how it might grow on you. Especially, when you add in some other strong textures like thinly sliced mushroom, hazelnut, and a crisp garnish. 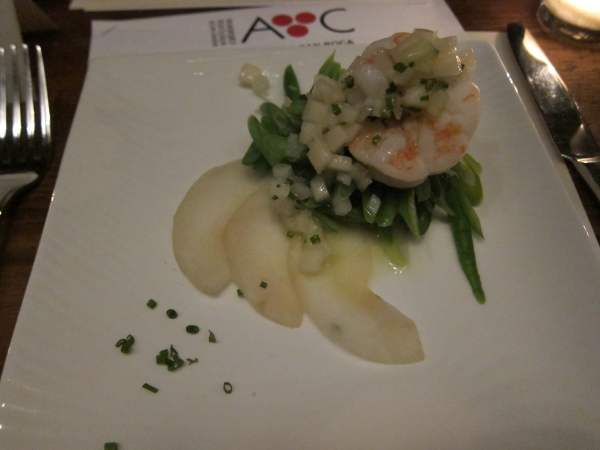 Nest of Green Beans with Fresh Pear Salad and Prawns.

Note: Simply delicious! (Both the wine and the dish). The fruit in this white wine has hints of ripe gooseberry with a lemon aftertaste. Fresh and crisp. I also enjoyed the freshly sliced pear, layered beneath a bed of green beans and marinated shrimp. A great combination for the palette! 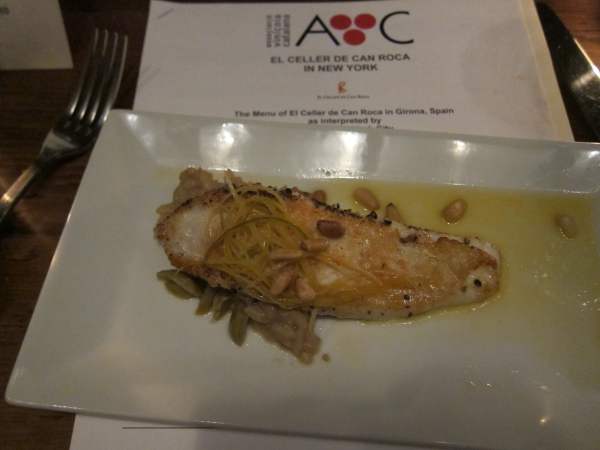 Note: This wine, which is normally red, was prepared and served white (by not including the skins in the process) This particular wine was a favorite among the guests, including myself! Cooked to perfection, the sole was topped with an Orange Peel Zest and Mediterranean sauce with Pignoli nuts (aka Pine nuts) and placed on top of a bed of green olive. 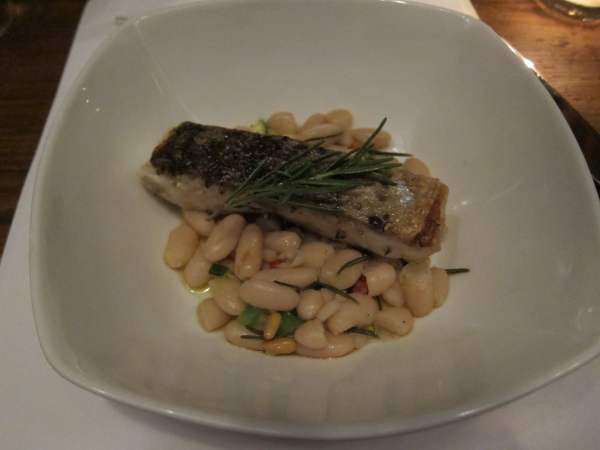 Note: This floral white has a smoky aftertaste with fruity notes. This dish would have been pure perfection, had it been a little less salty. The fish was cooked perfectly, with a hint of fried skin topped with Rosemary. The beans added a nice touch, though tasted far too much like salt water to fully compliment the dish (and wine). 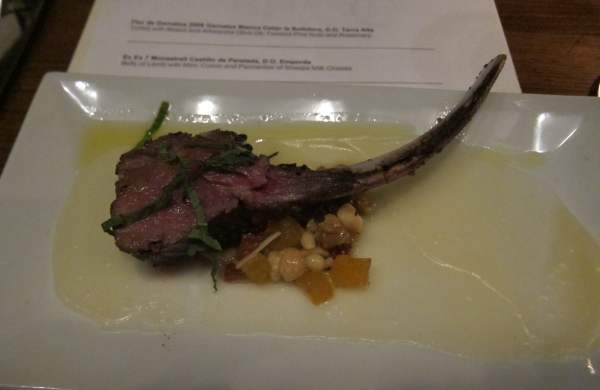 Belly of Lamb with Mint, Cumin and Parmentier of Sheeps Milk Cheese

Note: The first of the reds, this wine had a strong, yet sweet, flavor of blackberries. It was a perfect compliment to this Lamb dish. This was one of my favorite dishes. Served on top of Sheep’s Milk Cheese and topped with minced mint and a dried fruit compote – yum! 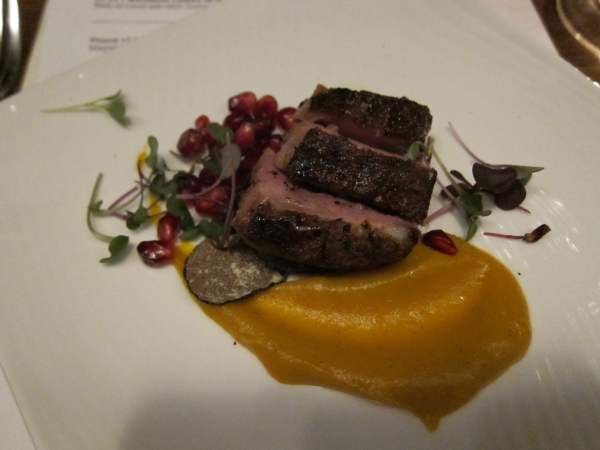 Note: This red wine had notes of ripe fruit, sweet spices, and was certainly flavorful! This duck was also incredible and is truly the perfect Fall dish! Layered on top of slice Truffles and Sweet Potato Puree and served with Pomegranate berries. This is definitely a great pairing for your next Fall Gathering! 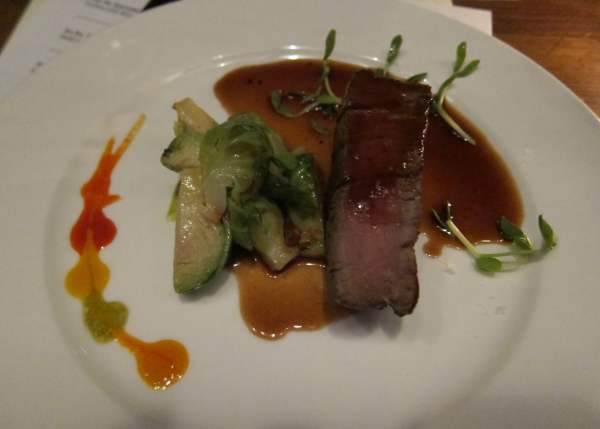 Note: This red had strong flavors of dark fruit with a sweet aftertaste perfect for serving with heavier meats. I love the way the chef prepared this dish – the 5 pepper sauce on the side of the dish looks pretty and emphasized the flavors of the sauce. The filet was tender and contrasted the al dente brussel sprouts. 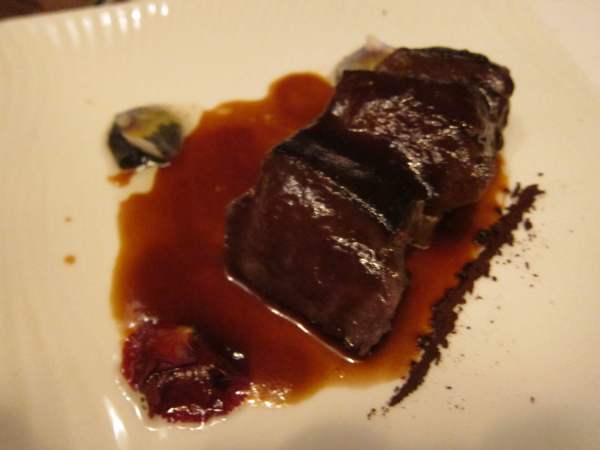 Loin of Venison with its own sauce, Cocoa Powder and Griottines

10th course: Loin of Venison with its own sauce, Cocoa Powder and Griottines

Note: Pungent aromas of black raspberry, cherry, sassafras and licorice, with a bright mineral overtone make up this wine. Venison is a much stronger tasting meat, for sure, and goes great with a nice red wine. The cocao notes in this dish were a surprising touch and now at ten courses in, I was starting to find that despite the wonderful flavors of both the food course and the wine, I was down to a nibble here and a sip there! 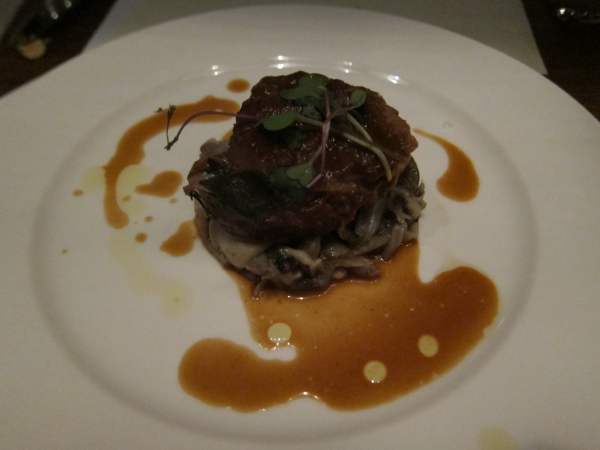 Sweet Cheek of Veal with Truffle and Mushrooms

11th course: Sweet Cheek of Veal with Truffle and Mushrooms

Note: This wine had a sweet finish and seemed to be leading up to dessert. This is a dish that I would savour down to the last bite, had I not already had so much to eat. I was sad to leave a drop of this delicious course on the plate, but alas, I had no choice! 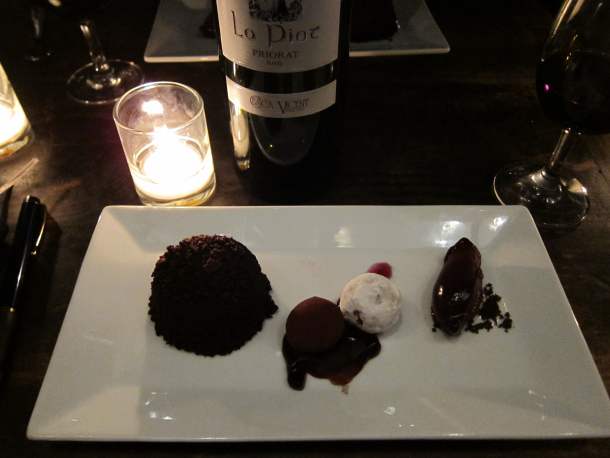 Chocolate with Different Textures with Violet Jam and Blackberry Sorbet

Note: The sweetest and richest of all the wines. A dark red that was heavy with a winter berry flavor.  Again, I could only manage a few small slivers from each of the plate’s offerings. I can say that the blackberry sorbet and it’s companions would be gone in seconds were they in front of me at this very moment! 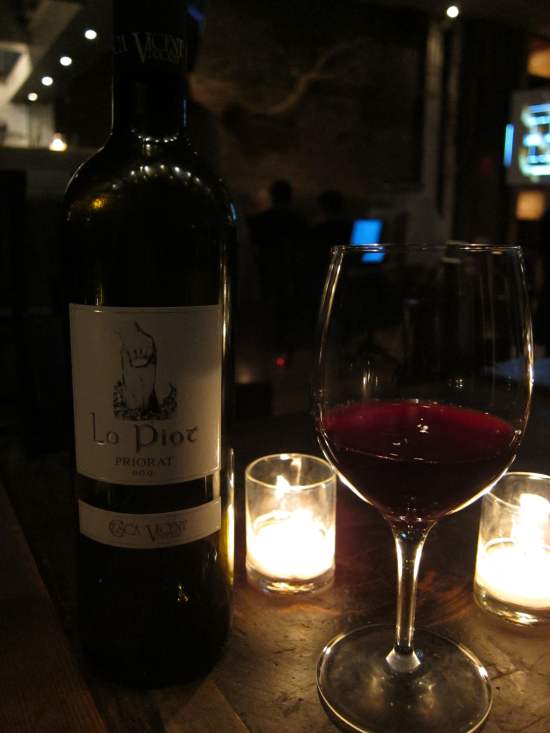 Josep Roca imparts a sommelier course in cooperation with the University of Girona Foundation and the Hostelries School and is involved in divulgation and formation tasks. In between, Josep also serves as an adviser and specialist with a Catalan TV show “En clau de vi”, at present on the 3rd season. He was awarded by the Spanish Gastronomic National Awards as the Best Maître and Best Sommelier, 2005 and 2010, Touristy Merit Medal of the Industry, Tourism and Commerce Ministry.

• There are many different soils and temperatures in the region. On the coast we find, from North to South: slate, granite and limestone. Inside the land consists of mostly clay. Temperatures average around 14 degrees Celsius. Rainfall averages around 530mm.

• The Romans were the first to establish a commercial wine business in Southern Catalunya at Tarragona around 200 BC, though the Greeks and Iberians had traded in wine before that time.

• Through the marriage of Count Berenguer IV of Barcelona to the Infanta Petronila of Aragon, Catalunya became part of the Kingdom of Aragon, but the real power lay with the Catalans. It became a wealthy trading power during the 12th and 13th centuries. When the Catholic Kings forged an alliance when Fernando of Aragon married Isabel of Castilla, Catalunya was included, and the unification of Spain began. The Catalans began a movement towards establishing a degree of independence from the rest of Spain.

• The Catalan language is one of the oldest based on Latin, and its preservation is important if only for that reason.

• The 1992 Olympics in Barcelona was a turning point for Catalunya, bringing the region widespread recognition.