Recently, at the Manhattan Cocktail Classic, in between sipping Campari based Negronis, I had the pleasure of sampling Steve’s Ice-Cream.

The unique flavors were what first caught my attention – I just had to sample the Mexican Chili Chocolate and Salty Caramel. Yum! I have been a (big) fan ever since! 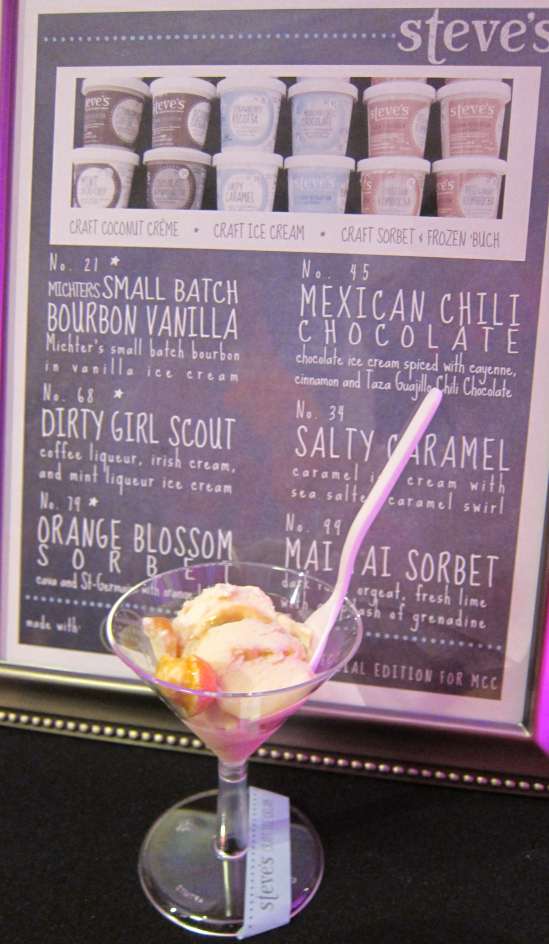 There are so many unique flavors to choose from including Blackberry Honey, Bourbon Vanilla, Coconut Cilantro Lime, Cinnamon Coffee, Mai Tai, and Rock Salt Margarita!

Also, Steve’s Ice-Cream is always making new flavors and posting everything on their Facebook Page. A recent status update tells us that right now they are now sampling a very unique  ice-cream sandwich:

“We tested an ice cream sandwich today… Ovenly Coconut Cookies with Mexican Chili Chocolate Ice Cream (made with Taza Chocolate Guajillo Chili Choc) and a smudge of super reduced Hibiscus Syrup from The Stand. Divine. We would post a picture, but it didn’t last long enough to photograph!!”

Another status update reveals some of the fresh ingredients that go into a recipe:

“We’re picking up cilantro from the market for this summer’s 1st batch of Coconut Cilantro Lime Coconut Creme! We ♥ cilantro (and summer)!!”

Founder, David Stein, then a 20-something philosophy student in nearby Cambridge, learned to do expert Mix-Ins and how to make Steve’s ice cream by hand in the original store. Ever since, he’s dreamed of recreating the excitement that was unique to Steve’s – the lines around the block, the wild flavor creations and the sheer joy of ice cream Steve’s inspired. Now he’s living that dream by bringing Steve’s back to start the next ice cream revolution.

Today’s revolution is where craft meets simple, yet striking, combinations of pure and natural – and where possible, local – ingredients. Their craft goes deeper than flavors, down to the very bases with dairy that is local, sustainable and delicious. They also offer coconut crème which is rich and velvety smooth and a frozen ’buch that is as sprightly and effervescent as the kombucha used to craft it.