For FALL/WINTER 2013 the sibling design team of Nicholas K – Nicholas Kunz and Christopher Kunz, pulled inspiration from the époque of the Arctic explorations in the late 19th to early 20th century.

The unforgiving landscape, one of the regions furthest from the warmth of the sun, surprisingly yields an array of tones, textures, colors, and moods. Into the depths of the ice-capped oceans spears of light ignite the deep blue and wild green aura of the swaying vegetation clinging to the grey barren earth. 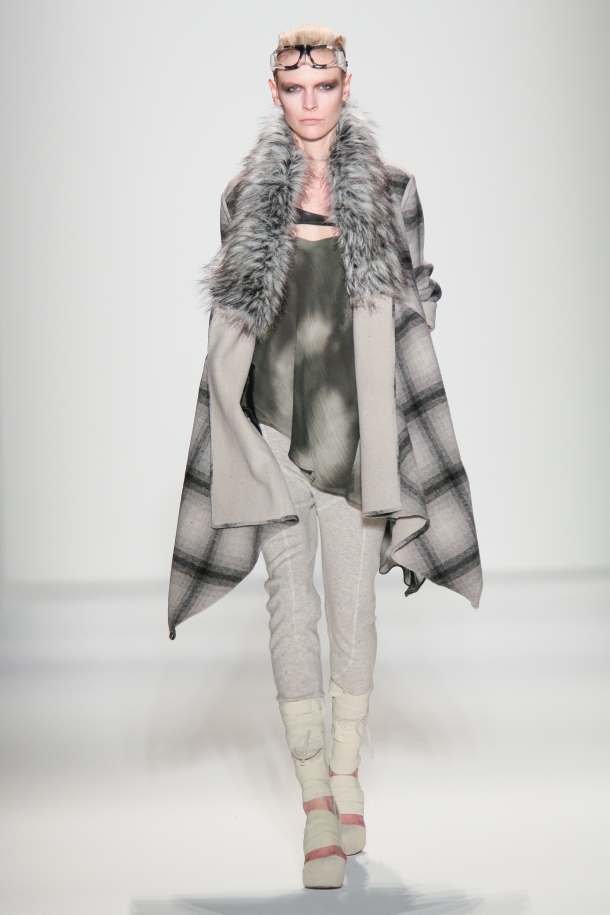 Above the white ice-plateaus reaching to the coasts are the exposed tops of pale mammoth glaciers marbled in hues of blue, grey, and white. They silently float in the placid waters like giants in waiting- ominously glowing in the moonlight. Amid the stretches of slick land and at the edges of the undulating masses of fresh powder, spawning from the cold dirt, the snow riddled sculpted rock formations offer an almost incomparable contrast.

The brightest whites and darkest blacks, the only other shadows in the icy terrain are drawn by either the swirling clouds above or the towering cliffs of enormous frozen walls that break the expansiveness of the horizon. And above in the crisp sky a show of swirling kaleidoscopic lights that jettison across the atmosphere from the flares of the sun. The aurora borealis gives fleeting warmth to the motif that would otherwise be lacking in worlds of ice. Months of darkness then months of light, this region works in its own way far from ours. Photo galleries below.

Explorers, challenged by this unforgiving polar fought the elements with all the tools available to them. As they hiked the icy plains wrapped in wools and furs the elements battered their ships, sleds, makeshift shelters, and especially their drive. Some prevailed in these bleak campaigns and some did not. From the disputed claims of the first discovery of the North Pole, like that of Robert E. Peary or Frederick A. Cook to the adventurers concerned with gaining knowledge and integration of the icy world’s native peoples, the lonely terrains beat down.

A man beyond any other known for his humanitarian work in the Arctic was named Peter Freuchen. A skilled writer, cartographer, and anthropologist, he helped in charting the land-masses of the cold vast north, document the many harsh expeditions he partook, and most of all he helped pioneer the beginnings of trade for the natives. His love of the land and its people solidified when he became the first westerner to marry an Inuit woman named Navarana bringing the two cultures they shared closer than ever.

Pulling from the cold sceneries and the warm wears of the adventurers and Inuits alike, this collection flaunts these tones in wools, cottons, and prints reminiscent of the shades, shapes, and colors existent only in this chilling realm.

Fluttering fabrics evoke the essence of the harsh white blizzards to the deep hidden world of the Arctic Ocean. Adding their own aesthetic to the utilitarian polar basics of the many explorers and natives comes the unique use of knitted raccoon hair, rich wool blends, light flowing knits, chunky plush sweaters, glacier hued plaids, angular cuts, and utilitarian closures.

The shifted drapery and asymmetrical tailoring allows for full-on layering of the soft fabrics while still emanating the exceptional palette of color in this collection drawn from the Arctic world.

The Fall/Winter 2013 show featured styling by Wendy Schecter, hair by Nick Irwin for Catwalk by TIGI, make-up Tina Turnbow for by NYX, nails by Lisa Logan for Red Carpet Manicure, women’s shoes by Nicholas K, and men’s boots by Danner.