Perhaps one of the best known New York fashion designers, who is least known to the general public, is Marisol Deluna. On March 22, Marisol will take a look back at her success as a designer and provide a glimpse forward at her 2012 fashion show.

Deluna has designed for more than 20 years and is best known for her couture silk scarves and ties that have become part of the fabric of philanthropy in New York City. This event will include her signature designs and refashion the Marisol Deluna New York label for a broader audience.

While design houses are embracing the power of prints, Deluna never left. Her hand rendered prints are characterized by intricate patterns with exuberant but well balanced colors. The collection showcases Deluna’s command of detail and construction with timeless silhouettes enlivened with her unique prints. The Marisol Deluna New York collection promises to add a new, vibrant voice in the New York fashion show scene and will include apparel and accessories for both men and women. More after the jump.

An Executive Member of Fashion Group International since 1995, Texas native Marisol Deluna has been designing in New York for 23 years. After graduating from art and design school in 1989, she started her career with textile and garment converters where she worked for designer, better, and bridge wear. Deluna has worked to preserve the craft of hand rendered designs learned while working for converters with the eye to detail learned from her father, an aerial cartographer. 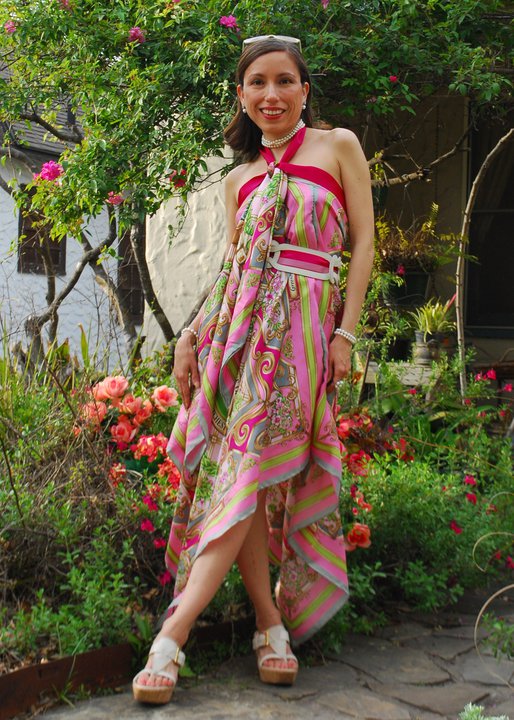 Marisol Deluna in one of her designs

Since forming her company in 1997, Deluna has had a primary focus on philanthropic and cultural institutions. Her designs have helped build awareness, enhance public image and raise funds for various community projects. Her diverse domestic and international clients include the Girl Scouts of the USA, the City of New York, Campus de Exelencia of Spain, Lansdowne Club of London, Holland Dames, Colonial Dames of America, League of United Latin American Citizens, Association of Junior Leagues International, Daughters of the British Empire, Cosmopolitan Club of New York, Pilgrim Society of Great Britain, Alpha Phi Foundation, San Antonio Stock Show and Rodeo and Museo Alameda Smithsonian. She has become part of the fabric of philanthropy.

Marisol’s fine silk scarves, which are screen printed by skilled craftsmen, have been presented to HM Queen Elizabeth II, US Secretary of State Hillary Clinton and former First Lady Laura Bush among others.

This night of fashion will be held the evening of March 22, 2012 and will include a VIP cocktail party, after party and the fashion show itself all within the magnificent General Society of Mechanics and Tradesman’s Library, a soaring three-story library topped with a beautiful skylight.