One of the shows I attended this season was Tadashi Shoji’s Fall 2011 Runway Presentation.

Tadashi Shoji is the founder and chief designer of the Tadashi Shoji collection. Born and raised in Sendai, Japan, he began painting and drawing from a young age and eventually moved to Tokyo, where he studied fine art. His talent was soon recognized and he was recommended for an apprenticeship with Japan’s leading contemporary artist, Jiro Takamatsu, who is credited with paving the way for the modern art movement in Japan during the sixties. 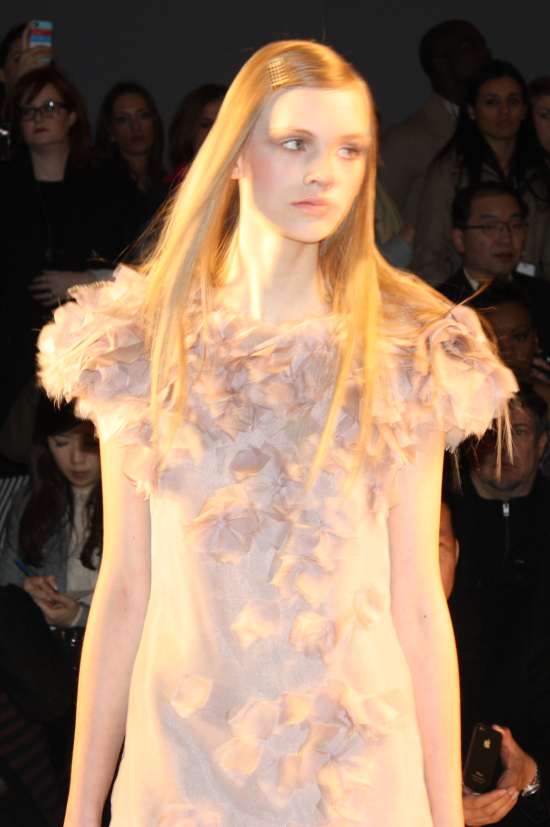 It was during this period that Tadashi became intrigued with New York City and its role in the contemporary art scene. He moved to the United States to attend university in Los Angeles and further his artistic development, when he discovered fashion design and awakened a life-long passion.

As a student, Tadashi was presented with the unique opportunity to work with famed costume designer Bill Whitten. In the flamboyant seventies, every major recording artist was demanding a Whitten original, and Tadashi created designs for A-list stars including Elton John, Stevie Wonder, Neil Diamond, The Jacksons, and Earth, Wind, & Fire.

Read More and View More Pictures After The Jump…

After earning his degree in Fashion Design, Tadashi began working at a prominent clothing manufacturer where he climbed the ranks for several years. Troubled by the fact that women had few options for special occasion dresses in the contemporary market, Tadashi identified a niche and set out on his own.

Established in 1982 by designer, owner, and president Tadashi Shoji, the Los Angeles-based fashion house Tadashi Shoji has become widely recognized for its original designs and innovative collections. The company has seen steady growth since its inception and is carried in more than 4,000 major department and specialty store doors worldwide, including Neiman Marcus, Nordstrom, Saks Fifth Avenue, Bloomingdale’s, and Macy’s. Internationally, the brand is available at high-end retailers such as Isetan, Epoca the Shops, and Anniversaire Omotesando.

In addition to a thriving wholesale business, Tadashi Shoji maintains its own retail operations with two signature boutiques in the United States – one in the prestigious South Coast Plaza and another in Forum Shops at Caesars in Las Vegas.

2006 marked the launch of the Tadashi Home Collection with a line of aromatic soy candles, sold in exclusive upscale department stores and fine boutiques worldwide. Additional accessories for the home, including personal care, bedding, and bath items, will debut in the near future.

Tadashi also launched the Tadashi Shoji Runway collection during Fall 2007 New York Fashion Week to rave reviews. By featuring the utmost in luxury and elegance, the much-anticipated collection continues to elevate and hone the brand’s image in the marketplace. His designs have won a loyal following with well-dressed women worldwide, including a wide range of celebrities from Helen Mirren, Queen Latifah, Deborah Messing, Beyonce, and Blake Lively.

Pics from my vantage point:

Official pictures from the show: