For Fall/Winter 2012, the sibling design team of Nicholas Kunz and brother Christopher Kunz are taking inspiration from their Arizona roots. The designers, known for their modern, downtown edge and dark, tonal design aesthetic, will showcase a lineup of men’s and women’s wear featuring rich items of faux coyote fur, shearling, fringe and metallic prints taken from desert snakes. 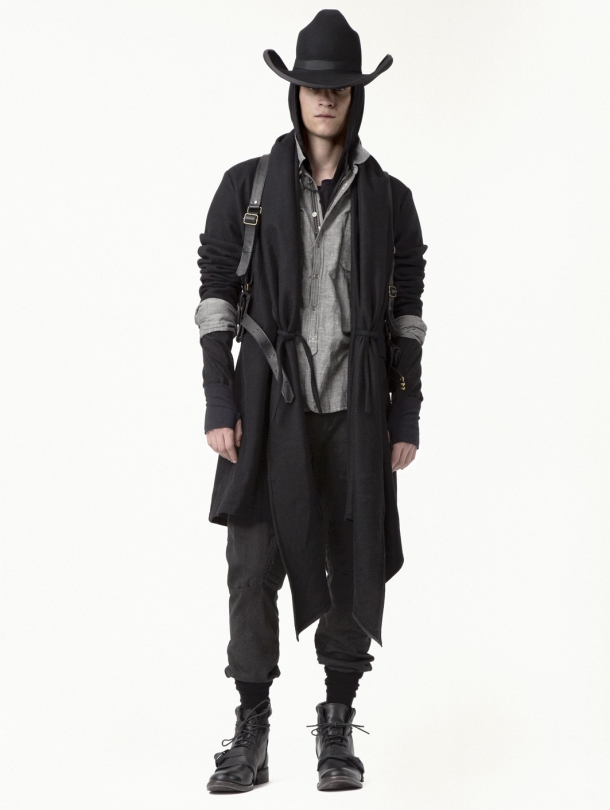 Kunz’s study of the Southwest focused on the 1920s artistic gatherings of American visionaries Georgia O’Keefe, Ansel Adams and Paul Strand at the Taos lodge of free-thinking patroness and socialite Mabel Dodge Luhan.

Among the pueblos and indigenous culture of Taos, the artists found a sparse lifestyle alternative to the New York salon gatherings, and produced starkly modern works of desert minimalism in photography, paint and literature. More below.

The severe black and white Photographs of Rebecca Strand, wife to photographer Paul Strand, served as central images to Kunz in the conception of the collection, giving the lineup a dark, minimalist approach to the Southwestern landscapes, predators and pueblo architecture that inspired the looks.

This season JEWELRY by MATT’s pieces harmonized perfectly with the Nicholas K collection, and so he was invited to show his work on the runway for FW 2012. Utilizing raw elements from nature as well as hand carved wood, cut and rough stones, JEWELRY by MATT for fall/winter 2012 seeks to remind us of a purer world beyond the cities in which most of us live.

The brand has grown greatly since its beginning in 2003, first with the menswear line in 2005 and Nicholas and Christopher’s induction as members of the CFDA in 2009. They now sell the Nicholas K collection in over 120 stores worldwide. For the Fall/Winter 2012 season the team have included rugged leather and canvas bags, as well as a small line of women’s shoes.