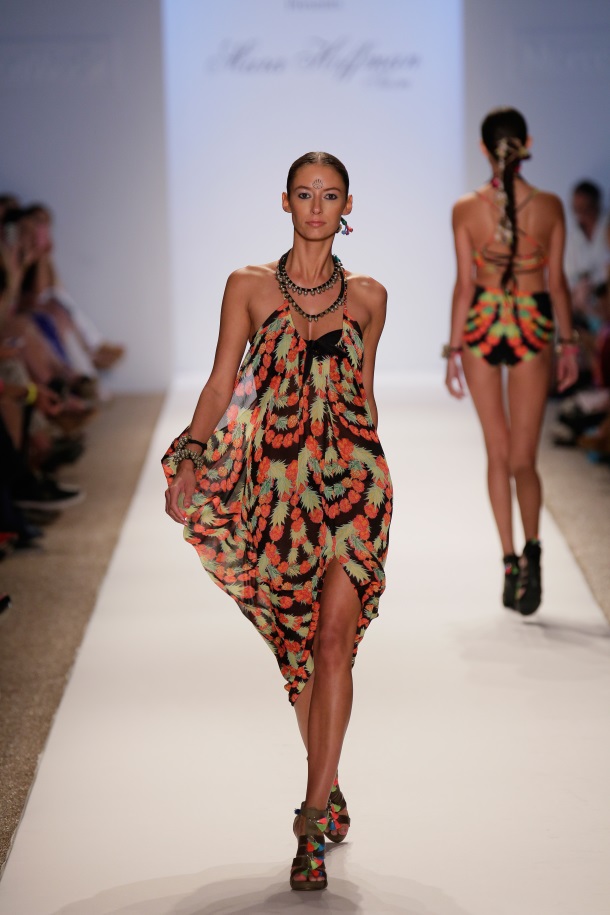 This year marks Hoffman’s fifth time showing at MBFW Swim, and the designer was thrilled to receive the prestigious “Mercedes-Benz Presents” title, as officially announced by Women’s Wear Daily on July 12th. To celebrate the program, a one-of-a-kind Mara Hoffman print wrapped E-Class Cabriolet made the rounds in South Beach during Swim Week.

Each season, Hoffman’s show takes spectators on a journey to colorful and often mythical places.  Her new swim presentation was no exception. As Hoffman explains, “This collection was inspired by the mythology and mysticism of India, shown through vivid colors and prints. If I had to pick one word to describe the collection, it would be “Shakti.”

Reference to India is apparent in the Ganesh print, inspired by the ancient spiritual figure representing creativity, knowledge and the removal of obstacles. Styles include a maillot, a halter bikini with tassels, and a racerback modal mini, as well as a new addition to the swim line, a fully functional surfing rash guard. 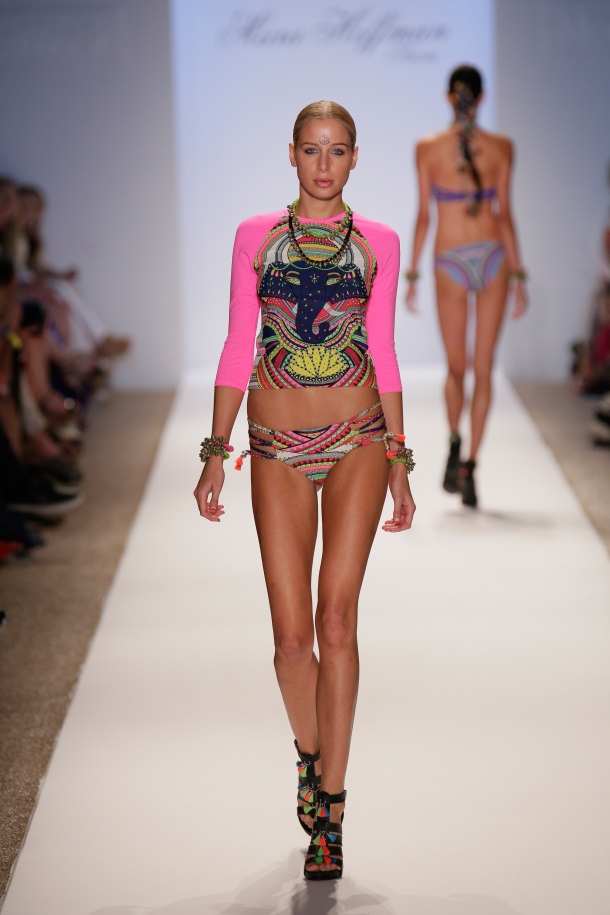 A Tiger Stripe cotton voile group features multiple cover-up styles. Devotional Garlands are featured in black and coral colorways with orange and pink flowers. Styles include a new lace-up back cut-out one piece and a classic v-wire, as well as several popular cover-ups. The psychadelic Shaktiprint can be seen on a new strappy bustier one piece as well as the cami underwire, several cover-ups, and a canvas weekend bag. Mirror Embroidery styles include two maxi dresses with intricate details and a mirror string tie-side bikini.

A kaleidoscopic bird print, Ananda, includes a v-wire bikini and cami underwire pieces, along with several cover-ups. Rays print evokes images of a sunset in pink & violet hues on a variety of bikini styles, a rash guard, cover-ups, and a vinyl tote bag. Astrodreamer is a cosmic-inspired print group with key styles like the string bikini with Brazilian cut bottoms and the best-selling basket weave bikini.

The Naga print depicts intertwined cobras and is offered in white and denim options. Styles include several bikinis, a racer maxi and an amazing new circular beach bag. New to Hoffman’s repertoire are Laser Cut pieces including a high-waisted bikini with bandeau top, shown in lagoon and black, as well as a tank one piece, mini dress and an amazing beaded neck maxi dress.

The show featured make-up by Lori Taylor for Smashbox, hair by Nick Irwin for Catwalk by TIGI, nails by LVX, shoes by Michael Antonio and styling by Richard Ruiz. Hoffman also collaborated with e-commerce site L-atitude to create a limited edition capsule collection of accessories that will be introduced on the runway in Miami, consisting of three styles including: an Indian tribal Thakur Spike Bracelet ($60) and Bandaru Necklace Long and Short ($80 and $70 respectively), which are all available in black, magenta, and lime. The neon thread and embellished pieces were inspired by vintage market finds which L-atitude’s buying team had previously unearthed in the jewelry bazaar in Jaipur, India. The Mara Hoffman x L-atitude collection will be available for purchase after November 15th.

Additionally, the Mara Hoffman Resort Swim 2014 show was viewable live on the web, thanks to Everything But Water‘s first ever runway live stream from Miami Swim Week.

A private official after-party took place at the Delano Beach Club and included a special “Make Your Own Havaianas” station, where partygoers lined up for the opportunity to customize their flip-flops by choosing their own color combinations of straps, straps, bottoms and special pins. The party also featured music by the multi-talented DJ Nick Irwin and delicious specialty cocktails by Vita Coco & Stoli.